The mythical hero Hercules (because he does not reach the category of a god) couldn´t imagine that his famous columns representing the two mountains he placed when he opened the strait that separates the Atlantic Ocean from the Mediterranean Sea (Mare Nostrum = our sea, for the Romans), one in Africa, the other in Europe, would actually be, in effigy, naturally, in the pockets and bank accounts of millions of persons all over the world.

This is true if we admit the theory about the origin of the dollar sign or symbol which says that it comes from the image of the columns printed in the Spanish coins called “reales” of to 8,  “pesos” or “columnarios” as they were known vulgarly (with regard to the explanation about why their name), minted in America: 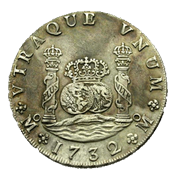 VTRAQUE VNUM (sic), on both sides one, prayed in Latin the coins minted between 1732 and 1773 both in Spain and in America by the Spanish Crown which ruled they both, so in the picture above the crown covers both hemispheres. And in fact as such (as one) perceived Spain and America our English-speaking neighbors in the high latitudes of the North Hemisphere.

The sign of the peso and the dollar originally had two bars or columns,  then reduced to one; the two bars would be precisely the Pillars of Hercules and the S the band which linked they two, in the beginning with the Latin legend Non Plus Ultra (not beyond).

It seems that Fernando of Aragon was who established this symbol as he took possession of Gibraltar; one of the columns was in Kalpe, Gibraltar and the other, mountain Abyla, in Ceuta according to some or in Morocco (on Mount Musa according to others). The strong Hercules would have separated these mounts and opened the strait to go to the kingdom of Geryon in order to steal him the oxen, tenth task that King Eurystheus commissioned him.

The Spanish coin real of to 8 was used in America and consequently in the territory that later would become the British colonies, including the United States or Canada, where it lasted. Actually this coin was known all over the world, and could be considered as the global currency at that time.

The legend NON PLUS ULTRA (not beyond) referred to the inability or fear that prevented from sailing west beyond the columns penetrating on the tenebrosum mare (sea of darkness). This fear was broken when Columbus discovered America. Obviously the NON had to be removed from the aforementioned legend and so it was done in the time of Charles V, because now it was possible or people could go further, beyond.

Today the columns of Hercules with the legend PLUS ULTRA (BEYOND) are part of the official seal of Spain. 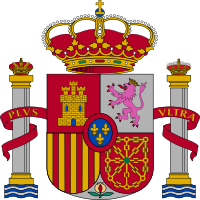 But not everybody supports this theory and some people explain the origin of the dollar symbol or sign as an evolution of the Spanish abbreviation Ps  referred to "pesos" or with the mark of the silver minted in Potosi, which overlapped the P and the S, appearing a symbol similar to the current one. In the image of the real of to 8 shown above appears in the lower right quadrant this mark PTSI ($) (as a result of overlapping the four letters). And even the most nationalistic Americans believe that the sign of the dollar is a result of the merger of U and S from United States.

Interestingly, we would like to affirm the relationship between the dollar sign and the graphical representation of the Roman coin called sesterce, (IIS, I-IS or HS), but nothing allows us to establish a relationship. The sesterce was worth precisely two ases and a half, which is what the letters stand for (II and semis = half).

Nor has any consistency the theory some people support relating, licking or matching the sign of the dollar with the image of Mercury's caduceus, a stick with a snake coiled around it. The reason for the relationship is taken from the fact that Mercury was the god of merchants (and also thieves …), who often handle money.

Another issue is the origin of the word "dollar” (not the origin of the symbol or sign which it is represented with, that is what we have been analyzing till now, but the etymological origin of the word). It seems that it derives from" Thaler " or" Taler ", German silver coin coming from the name of a town called Joachimsthal, nowadays in the Czech Republic, whose coin was called precisely Joachimsthaler . But this has nothing to do with Latin or Rome, so we rather leave the question here.

The truth and the real thing is that if Hercules was powerful in ancient times, remember his twelve labors, no less powerful, maybe even more, is today the famous dollar, especially the American green dollar, although many other countries also have it as their national currency. Mighty lord is Mr. Money, especially in the shape of the dollar.

The Pillars of Hercules