The public baths or spas (thermae) are an essential element in the concept of the city, of the Latin “urbs”, the city of the Romans. They built many cities in the territory of the Empire and not all missing or forum or square, or a temple, or basilica (multipurpose palace) or theater or amphitheater or baths.

Hadrian, the traveler emperor, from Hispanic origin, is considered one of the "good emperors". Among his virtues,there were with him sympathy and closeness to the people, the plebs. His biographers say that he used to go to the public baths as a citizen and it is related an anecdote about it that I  relate now, but not before a little reflection is made.

Hadrian is a cultured emperor: his ideas are mixing of Stoicism and Epicureanism, like many other Roman, with some sparkle or grace, as it is reflected in the story.

The second question is the claim that the baths were an important factor in social cohesion, open to all citizens who have a small amount to pay the entrance tiket.

The story, a hundred times repeated, tells usually without offering the old fountain, that I lay now at the disposal of the reader:

He surpassed all monarchs in his gifts. He often bathed in the public baths, even with the meanest crowd. And a jest of his made in the bath became famous. 6 For on a certain occasion, seeing a veteran, whom he had known in the service, rubbing his back and the rest of his body against the wall, he asked him why he had the marble rub him, and when the man replied that it was because he did not own a slave, he presented him with some slaves and the cost of their maintenance. 7 But another time, when he saw a number of old men rubbing themselves against the wall for the purpose of arousing the generosity of the Emperor, he ordered them to be called out and then to rub one another in turn. (The English translation is by David Magie;  Loeb Classical Library edition)

Yesterday and today there is always a large group of fellows  waiting from others what they could get with their own effort and organization. Although Hadrian  certainly did not intended it, this is a good message for all those who hope in the powerfulfellows  resolving their problems.

Note 1: The word “thermae” comes from the Latin,public baths, and from the Greek θερμός (thermos = hot). In turn, the Greek word θερμός comes from the Indo-European root * gwher which gave fornus for example, from where furnace comes.

Note 2: We understand the text better if we know that the ancient baths or “thermae”, about which I will discuss another time more extensively , were also a gym and massage place , where oil was  applied. The layer of oil with  dead skin cells were removed with a scraper, in Latin called strigilis, in Spanish estrigil , as a small curved knife . The story’s soldier's, without a slave  who pass the strigil , scratched himself on the wall. So common it was their use (of strigil) than it was immortalized in the famous statue by Lysippos ( court sculptor of Alexander) known as " Apoxyomenos, " ἀποξυόμενος , Scraper , (from Greek ἀποξὐω / apoxúô , " scrape", ).

Although in this blog I use only very few images, because I am convinced by the evocative power of words , I reproduce an image of the Roman marble copy of the famous " Apoxiomenos " existing in the Pio- Clementino Museum of Rome ; the original bronze , like many others, was lost. The other photograph represents a strigil. 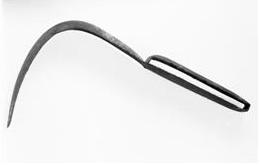