The word "digital" derives from the Latin "digitum", meaning "finger". "Fingerprints" (like digital-prints; in Spanish “huellas” (prints) “digitales” (digital, finger) ) are the signs or marks that your fingers leave on the objects they touch and which so much help they offer to the police because they are unique of each person or individual.

The Romans, like other ancient people and not so ancient (we still do it sometimes if only to highlight our diction) counted on the fingers. So we call the first nine numbers "digits" which strictly speaking means "fingers" and if the amount increases from nine we say that it has got two or more digits.

The hand is the oldest counting and calculating machine that exists. With a hand or two hands at the same time the Egyptians, the Persians, the Greeks, the Romans could express the numbers up to 9,999 with a language similar to deaf-mute people´s language.

The Irish monk of the seventh century Bede the Venerable in his work De ratione temporum (About time division), in the first chapter entitled De computo vel loquela digitorum (About the count or language on the fingers) describes us the system. Pointing to other parts of the body with the hands it is possible or we are able to count up to a million, quantity that is expressed, according to the monk, crisscrossing the fingers of both hands.

The Egyptians and Persians would know the system of counting on the fingers and, of course, it was also known in Greece. Aristophanes (444 BC. – 385. BC) refers to it, for example, in his comedy The Wasps (look it up at pages 655-663): (satire against the politician Cleon and the malfunctioning of the courts):

The Romans also counted on the fingers. Testimonies are numerous, such as for evidence the abundant numerical tessera (tesserae in Latin) or small tokens made of bone or ivory, sort of tickets or receipts that Roman collectors delivered to taxpayers for the amount of money they had given them first; on one side they showed the corresponding digital figure and on the other side they showed the value in Roman numerals.

Numerous authors witness it too:

Plautus in his comedy Miles Gloriosus, 204 (The braggart soldier):

He counts on the fingers of his right hand

Cicero in a letter to his friend Atticus, Epistulae ad Atticum, V, 21.13 says:

if I know your fingers (that is, your ability to count on the fingers.

Or the poet Juvenal in his Satire X, 246 251, referring to Nestor, famous in Antiquity for his longevity:

The king of Pylos (Nestor), if any credibility you give to the great Homer,
was an example of life as long as that of the crow.
Hugely lucky he who avoided his death for so many centuries
and already counts his years with the right hand
and has drunk the new wine so many times!

Very expressive is the following text by Apuleius in his "Apology, 89", intelligible only if we know how the way to express the numbers with the fingers works:

"If you had said thirty years old instead of ten, we may have thought that you had made a mistake in the act of numbering and you had opened the fingers you should have had in a circle shape. But forty, which are easier than any other to be expressed with the opened palm, which you increase in a half, cannot be an error in the gesture of the fingers, unless, thinking that Pudentilla is thirty years old, you have counted them double because of the two consuls there are every  year".

And the famous Quintilian in his method to train speakers or orators Institutio Oratoria, Institutes of Oratory , I, 10, 35:

In the processes some tasks or questions to check the participants ´skills on the use of numbers are very common and in them they are considered ignorant not only those ones who hesitate or doubt on the sums, but those who fail on the account by the wrong or clumsy gesture of the fingers as well.

It seems that St. Cyril of Alexandria (c. 376-444) in his Liber de computo (Calculating, Computing or Counting Book), chapter CXXXVIII, entitled De flexibus digitorum, III, 135 (about the positions of the fingers) provides us the earliest description of the system; Saint Isidoro of Seville shows it again in his great encyclopedia Etymologies in the sixth century, and monk Bede the Venerable inspires in him, whose description was longer present during the Middle Ages and well into modern times.

This art of counting or expressing numbers with the fingers and the hands is technically called dactylonomy, from the Greek δάκτυλος (dáktulos: finger). 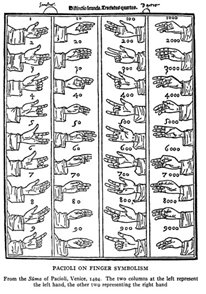 Illustration taken from the book published in Venice in 1494 by Luca Pacioli entitled Summa de Arithmetica, geométrica, proportioni et proportionalita (in English the title of this book would be: Sum of Arithmetic, geometry, proportions and proportionality).

All this has been going on for a long time, certainly during the Middle Ages and also the sixteenth century and even after we still find some remains.

But there is also another art, the dactylology or art of talking with your fingers and hands, like the deaf peoples’ language, which was also practiced in Antiquity.

We will quote Ovid´s testimony, but obviously the system was previously known, as it is evidenced by some authors like Ennius:

You will read words on my fingers and words written in wine.

So rightly we said at the beginning that the Romans digitized; they did it with the numbers and the language or voice; they digitized numbers and words.

Precisely from "digiti" comes the English word "digit" to mean "figure, number". Modern computers or computing machines work with "binary" base or code (from the Latin bini = two). From the contraction of these two words, binary and digits comes the word "bit" or minimum unit of information in modern computing. So these modern machines digitize too, but differently.

It is also worthy knowing that another very primitive and widespread counting system consisted on adding or removing pebbles from a pile, small stones which in Latin are called "calculi" (“calculus”, calculations, from the Greek χάλις, kalis = limestone, from which it derives the Spanish word "cal”, “lime”, “piedra de cal” = “limestone” and as a result of it derives the word “calculate”, count, compute). Therefore it is also called "calculus" (=stones) the stony concretions that are formed in the kidneys or bladder or other organs of the body and cause so much pain to be expelled. From this system arose the art of calculating and later the abacus as a suitable instrument to do this activity.

The ancient Romans computed and digitized over two thousand years ago.