The Ionian city of Miletus in Asia Minor, as none contributed to the development of Greek rational thought, also contributed significantly to the sexual enjoyment of the Greek population of the Mediterranean.

Miletus was an ancient Ionian Greek and prosperous city of Asia Minor. The place was really busy since at least the Bronze Age;  now it is part of Turkey. In Greek times, the Milesians created numerous colonies, especially on the coasts of the Black Sea.

The geographical location between East (Persia, India ..) and West (continental Greece, Egypt ...) was key, according to some authors, in the reception of diverse cultural influences and the beginning of the adventure to philosophy and the prevalence of reason.  Authors and thinkers as important as the philosopher and mathematician Thales, and philosophers as Anaximander and Anaximenes, Socrates predecessors, and the architect Hippodamus who designed towns with regular and harmonious design, or Aspasia, mistress of Pericles who therefore influenced the social and cultural life of Athens, or the political and tyrant Aristagoras, who decreed the "isonomía" or equality before the law (from isos = equal and nomos = law, rule), they all come from Miletus.

Among these of Miletus, the most famous are made of leather or dog leather. They are quoted, for example, in the  famous comedy of Aristophanes Lysistrata, v. 112, ss, in which the Athenian and Spartan women state a "sex strike" to force their warring husbands and lovers to make peace and end the famous Peloponnesian War that lasted nearly thirty years.

LYSISTRATA: And not the slightest glitter of a lover! And since the Milesians betrayed us, I've not seen the image of a single upright man  to be a marble consolation to us. Now will you help me, if I find a means to stamp the war out. (Translation by. Jack Lindsay)

But a more literal translation says: ““Since the day we were betrayed by the Milesians, I have not once seen even an eight-inch olisbos as a leathern consolation for us poor widows.”

This Herodas, who sometimes appears as Herondas, is a Greek poet of the third century BC who describes  small humorous scenes of popular life in the language of the people. His subjects, although drawn from popular life, are treated as a small work with literary pretensions. These little poems called "mimiambos", on Greek "μιμίαμβοι" mimiamboi, word composed of "mimes", (lower rate of representation in which the important thing is the configuration of a character type), and iambic, which is a kind of appropriate verse for these contents halfway between costumbrismo and humor.

Since the VI  is rather short, barely has 100 verses, I reproduce it in full because it is interesting to have a picture as complete as possible of the Greco-Roman reality, which in most cases has little to do with history or ancient literature taught in schools and so we can read a mimiambo.


VI A friendly (or private) chat

KORITTO: Sit down, Metro;—get up and set a chair for the lady; must I tell you everything myself, and will you do nothing of yourself? La ! it is a stone rather than a slave girl that I have (sitting) in my house; whereas, if you are having your rations measured, you count the crumbs, and if one wee bit runs over, you mutter and fume the whole day so that the walls tumble in. So you’ve waited, you robber, till now when we want it to wipe it and make it clean? Be grateful to my guest here, but for whose presence I’d have given you a sound taste of my hands.

METRO:  Dear Koritto, you are galled by the same yoke as I; I too day and night bark like a dog, roaring at these damnable creatures. But to the point—why I came here was—

K. Out of our way and to hell with you, you cunning  creatures, all ears and tongues and the rest of you sheer idleness.

M. Please tell me the truth, dear Koritto, who stitched you the scarlet baubon ? *

K. Where have you seen it, Metro?

M. Oh, it was Nossis, Erinna's daughter, who had it given her a couple of days ago—la! a pretty present! .

K. Nossis! from whom did she get it?

M. Will you betray me if I tell you?

K. By these sweet eyes, Metro dear, not a soul shall hear from Koritto's mouth anything you say.

M. It was Eubule, wife of Bitas, who gave it her, and told her that no one was to know about it.

K. Women, women, this woman will be the death of me one day. I had pity on her entreaties and gave it her, Metro, before I used it myself, and she snatches it like some treasure-trove and makes a present of it to improper people; I bid goodbye, dear, for ever to such a woman as this; let her choose some other friend instead of me henceforward. No loan to Nossis, daughter of Medokes, shall I bestow—if I speak more strongly than a woman should, forgive me Nemesis—even of any old rotten one if I had nine hundred and ninety nine besides.

M. Pray, Koritto, don't fly into a temper at once, if you hear any bad news. A pious woman should endure all things. . But it's my fault for talking—in short, I ought to have cut out
my tongue first. But to return to this special point I mentioned, who stitched it? Tell me as you love me. Why do you smile at me? Haven't you seen Metro till to-day? What means this delicacy of yours? I enjoin you, sweet Koritto, don't lie to me, but give me his name.

K. La! what's this enjoining? It was Kerdon whostitched it.

M. Tell me, what Kerdon ? There are two Kerdons, one the grey-eyed fellow who lived near Myrtaline Kylaithis wife—but  no, he couldn't stitch a plectrum for a lyre –the other lives near Hermodorus Mansions, as one leaves the Broad; he once cut a figure, only now he has grown old. Once his name was connected with Pylaithis—now she is in heaven; may her kindred keep her memory green.

K. As you say, Metro, it is neither of these. This fellow comes from Chios or Erythrae—I don't know which ; he is bald and short, the very image of Prexinos, as like him as fig is to fig; when he speaks however you will know that it is Kerdon not, Prexinos. He works at home, selling on the sly; for every door now-a-days shudders at the tax-gatherers—but in workmanship he is a true Koan, you would think you saw not Kerdon's handiwork but Athena's; anyhow I—he brought two of them with him, Metro—at first glance my eyes swelled out of my head; I may tell you,—we are alone—, they were firmer than the real article, and not only that, but as soft as sleep, and the laces are more like wool than leather; a kinder cobbler to a woman you could not possibly find.

M. How comes it then that you left the other one?

K. Well, Metro, I did all I could, and resorted to every form of persuasion—I kissed him, stroked his bald head, gave him liqueurs to drink, caressed him, and very nearly granted him the last favours.

M. Well, if he asked even that, you should have granted it.

K. Oh! of course, only one must not be tactless; Bitas'Eubule was with me grinding corn; for that good lady day and night wears away our millstone to slag to save herself four obols
for setting her own.

M. How did he find his way here to you, dear Koritto? Tell me this too truly.

K. It was Artemis, wife of Kandas the tanner, who showed him our house and sent him hither.

M. Oh! Artemis, -she is always up to some new device, leaving even Thallo far behind in her bawdry. But, since you couldn't rescue the pair, you ought at least to have inquired who commissioned the other one.

K. I kept on begging him, but he swore he would not tell me; he was taken by her and conceived a fondness for her.

M. That means I must be off; at the first opportunity I will  go to Artemis to find out all about Kerdon. Farewell, sweet Koritto; my old man is hungry and its time to be making my way home.

K. Shut the door, you there, hen-girl, and count to see whether the hens are all safe, and throw them some darnel. For it's a fact that the bird-fanciers will rob one, even if one keeps them in one's lap.  (Translated by Walter Headlam, Cambridge at the University Press. 19229

* Note: It is no doubt that the baubo of Herodas is the olisbos of Aristophanes.

Note: It is no doubt that the baubo of Herodas is the olisbos of Aristophanes.

Certainly all the texts cited (and almost all existing) are written by male authors; therefore  we should be very reasonable doubt whether those texts respond to the male view, that men had about female sexuality, often droll vision and little in line with reality, or reflect the thinking that women had about their own reality. Most likely they reflect a sexist vision of the matter as it continued happening until today, when the own female perspective has started to become visible

Graphic representations on Greek vases or glasses are also very numerous. Naturally, also it was used by the Egyptian, Roman women .. 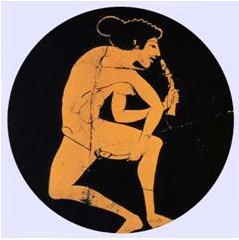 .Known is the different mindset and attitude with which the Greeks focused everything related to sexuality. Certainly they do not consider masturbation as amoral and abnormal behavior;  reduced to the realm of the private and personal, it is not prohibited neither laws nor beliefs. The customs of the ancient stage of Rome were very different, less permissive, but they were accepting and imposing Greek cultural behavior;  later the things were  dramatically changed in the West, especially from the spread of Christianity, and a very restrictive and demanding sexual morality, sometimes quite hypocritical and even imposed against nature,  prevailed for hundreds of years, and even today for many people.

Anyway, in this field the Greeks  help us also to see things with more human, more peaceful and more serene mind.

There are other etymologies more fetched which in my ignorance I can not consider as relating it to a nautical instrument resembling a phallus that is used to secure the paddle, or with English expression “dil doul”, attested in the seventeenth century to refer to the penis in a famous ballad or the current term “diddle”,that in popular parlance means "to get laid."

The consolation came from Miletus