The man’s innate curiosity has led him to countless undertakings, assignments and ventures. The desire to know the world in which he lives has pushed him over and over again in voyages and explorations of the most inaccessible places.

Indeed, the planet exploration race increases after the discovery of America by Columbus to the late fifteenth century. In the early twentieth century there isn´t almost any place left to be discovered and once the Earth is already known, space exploration begins. The curiosity, the desire to know is the driving force that remains unstoppable.

The ancient man was largely stopped by his fear to the unfathomable sea, unknown, dark, his fear to high seas, altum mare ("altus,-a,-um" means in Latin "high" and also "deep", which is the meaning that we will have to use when we speak of "high seas", altum mare).

But this should not mislead us. The ancient Phoenicians, Greeks, Romans and other fishing villages traveled around the whole Mediterranean Sea, and they also went out to the Atlantic and Indian Ocean. What else is the "Odyssey" but the story of the difficult journeys of the Greeks through the Mediterranean Sea?

There are several remarkable exploration voyages in ancient times of which we have news.
One of the issues that most intrigued the Ancient World, the Pharaohs, the Greeks, and the Romans was the discovery of the so-called "sources of the Nile". Numerous ancient texts refer to the unknown sources of the Nile and its fertilizing summer floods. Herodotus, who also lived in Egypt, is the author of the famous phrase "(Egypt) is a gift of the Nile; δῶρον τοῦ ποταμοῦ (Stories, II, 5, 1)" and repeatedly he refers to the river and its floods in the already quoted Book II.

Lucan, Ovid, Petronius, Martial also refer in numerous passages to this old topic. For example, Horace, singing exaggeratedly the power of Augustus, resorts to cliché and says in Odes, IV, 14, 45-46

to you (obey) the Nile, which hides the source of its sources

On several occasions they tried to explore the course of the river. The most important, at least the best documented expedition, took place during the reign of Emperor Nero. In it, the naturalist and philosopher Lucius Annaeus Seneca participated, Hispanic from Corduba (current Cordova), who spent part of his youth in Egypt, for health reasons. He was attracted no doubt, as the good naturalist he was, by the issue of the origin of the Nile, of the "sources of the Nile", of the header, "caput Nili” as it was called then.

Several years later, Seneca was teacher and tutor of Emperor Nero (he lived from 37 to 68 AD). Nero has gone down in History, rightly, as a monster, but he was not always a monster nor was everything he did wrong. Seneca certainly made him be interested in the issue of the "sources of the Nile", and due to this he prepared an expedition commanded by two centurions around the year 60 AD. Seneca collected in Book VI of his “Quaestiones Naturales” ("Natural Questions") the story or report of the centurions, which I reproduce below in English and Latin:

And don't you know that among the explanations given of the occurrence of the inundation of the Nile in summer, one is that it bursts forth from the ground, and is swollen not by rain from above but by water given out from within the earth?

I have myself heard from their own lips the story told by the two non-commissioned officers sent to investigate the sources of the Nile by our good Emperor Nero, a monarch devoted to virtue in every form, but especially solicitous for the interests of truth. The King of Ethiopia had supplied them with assistance and furnished letters of introduction to the neighboring kings, and so they had penetrated into the heart of Africa and accomplished a long journey.

"We came indeed," I give their own words, "to huge marshes, the limit of which even the natives did not know, and no one else could hope to know; so completely was the river entangled with vegetable growth, so impassable the waters by foot, or even by boat, since the muddy overgrown marsh would bear only a small boat containing one person. There," my informants went on, "we saw with our eyes two rocks from which an immense quantity of water issued."

Now whether that is the real source or only an addition to the river; whether it rises there or merely returns to the surface after its previous course underground ; don't you think that, whatever it is, that water comes up from a great lake in the earth? The earth must contain moisture scattered in numerous places and collected at depth in order to be able to belch it out with such violence. (Translation by John Clarke, M.A.)

From this story we can deduce that the centurions rallied the White Nile and arrived in the area of Sudan, called "Sudd" which means "barrier". It is a marshy area also in our days, occupying thousands of square kilometers and therefore impassable in the ancient world.

There is still a more intriguing fact. The geographer, astronomer and mathematician Claudius Ptolemy of Alexandria (who lived about 100 to 170 AD), wrote a Geography with detailed descriptions. Maps made by him have not been preserved, but with the detailed instructions of the manuscript appeared around the year 1300 AD, cartographers have drawn his maps. Interestingly, in it, both arms of the Nile River and its origin in some large lakes appear. Ptolemy had collected some information of the cartographer Marinus of Tyre, which contained the story of a Greek merchant, Diogenes, who traveled around year 100 AD from the African coast of the Red Sea to the region of the Great Lakes Victoria and Albert, from which the Nile grows up of. The "Mountains of the Moon" he speaks of would be the current Ruwenzori.

He would have anticipated in 1700 years to Richard Burton, Speke and Stanley ´s famous voyage. The news was picked by Ptolemy, the Arabs translated it. In the Middle Ages it was believed that the Nile was born because of a few lakes generated by the snow which came from the “Mountains of the Moon" and thus it is reflected in the mapping since the fourteenth century when Ptolemy's Geography appeared. 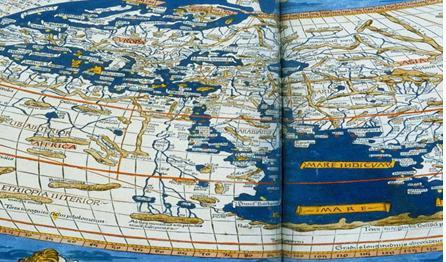 In the seventeenth century the Spanish Jesuit Pedro Páez (1564-1622), who was trying to create a Jesuit mission in an area of great difficulty, found the sources of the Blue Nile. But this was forgotten.

In the nineteenth century the mentioned British explorers, after several scans and many discussions, rediscovered the "sources" of Diogenes and they have gone down in History as their "discoverers". Their work has not been forgotten instead, at least until now.

Did the Romans know the sources of the Nile?