So at this time Aristophanes explains gracefully (at least for the spectators of the time) and graphically, how the fart is like thunder, or conversely, the thunder is like a fart of clouds.

Already he gives us a foretaste of explanation of these issues always flattering laughter popular on verses 154 ff. (Clouds):

Disciple: Chaerephon the Sphettian asked him whether he thought gnats buzzed through the mouth or the breech.

Strepsiades: What, then, did he say about the gnat?

Dis.: He said the intestine of the gnat was narrow and that the wind went forcibly through it, being slender, straight to the breech; and then that the rump, being hollow where it is adjacent to the narrow part, resounded through the violence of the wind.

Strep.: The rump of the gnats then is a trumpet! Oh, thrice happy he for his sharp-sightedness! Surely a defendant might easily get acquitted who understands the intestine of the gnat. (Aristophanes. Clouds. The Comedies of Aristophanes. William James Hickie. London. Bohn. 1853?.)

Later he enters deeply into such a serious issue. After Socrates presents to Strepsiades  the Clouds as goddesses and sovereign moved by the vortex and not by Zeus, as they believed the rest of the Greeks, he says in verses 380 ff.

Strepsiades: Vortex? It had escaped my notice that Jupiter did not exist, and that Vortex now reigned in his stead. But you have taught me nothing as yet concerning the clap and the thunder.

Socrates: Have you not heard me, that I said that the Clouds, when full of moisture, dash against each other and clap by reason of their density?

Strep.: Come, how am I to believe this?

Soc.: I'll teach you from your own case. Were you ever, after being stuffed with broth at the Panathenaic festival, then disturbed in your belly, and did a tumult suddenly rumble through it?

Strep.: Yes, by Apollo! And immediately the little broth plays the mischief with me, and is disturbed and rumbles like thunder, and grumbles dreadfully: at first gently pappax, pappax; and then it adds papa-pappax; and finally, it thunders downright papapappax, as they do.

Soc.: Consider, therefore, how you have trumpeted from a little belly so small; and how is it not probable that this air, being boundless, should thunder so loudly?
Strep.: For this reason, therefore, the two names also Trump and Thunder, are similar to each other. (ταῦτ᾽ ἄρα καὶ τὠνόματ᾽ ἀλλήλοιν βροντὴ καὶ πορδὴ ὁμοίω)

Note: On Greek Thunder is said βροντὴ, Bronte, and fart πορδὴ, pordé, which have some similarity, which is lost in translation.

They are two different Greek words that have given etymologically the term "eschatological", which consequently has two meanings in the Spanish dictionary: ἔσχατος, eschatos (last, final,) and σκῶρ, σκατός, skor , skatos, (droppings, manure, ordure). The first meaning, says: " adj. Of pertaining to the last end  of the grave". The second says: " adj. Of or pertaining to excrement and dirt. "

It seems that scatology appears in the twentieth century when psychology and psychiatry observe how some people are sexually aroused uttering profanity, dirty or rude words and define this dependence as scatology deriving it from the Greek word skatos, excrement.

The confusion of two terms which originally have nothing to do with each other occurred in Spanish  by a bad transcription of the Greek phoneme X, ji, as c, k, and adding an e– to the initial liquid s of skatos.

By the way, there is also to designate that concerns  the droppings the term “coprology” derived from κόπρος, corpos.

Curiously I don`t find this quote from Aristophanes in the famous little work of Spanish Francisco de Quevedo, “Gracias y desgracias del ojo del culo “ ("Fortunes and misfortunes of the asshole") in which he cites profusely Aristophanes himself and many other ancient authors.

However  I find the appointment in the equally famous little book of the Dean of the Cathedral of Alicante, Don Manuel Martí, Defence of the Fart, translation of the original work in Latin “Pro Crepitu Ventris”. The full title says Oratio Pro Crepitu Ventris habita ad Patres Crepitantes ab Emanuele Martino Ecclesiae Alonensis Decano, (Speech in Defence of the Fart, delivered before the Farting Fathers by Manuel Marti, Dean of the Cathedral of Alicante.),  first published in 1737. He had died just this year, but he wrote the little book in question certainly  during his stay in Rome, probably in target to hit with his wit to Roman intellectuals among whom he moved.

Manuel Marti y Zaragoza was born in Oropesa del Mar, Castellón, July 19, 1663 and died in Alicante, April 21, 1737). He was famous writer, Hellenistic, epigraphist, archeologist and Spanish humanist. Some of you may be surprised about how is it that such a sensible and formal  philologist (he had an interesting activity as Hellenistic and philologist) could publish  a little book on subject such as scatological.

(As good philologist, the Dean of Alicante also transcribed on Greek the verses of Aristophanes)

Farting Fathers, we  all hear his  language, but nobody understands it. In any place on earth where you hear him, you admire him speaking in his exotic dialect away completely from comprehension of men. You will consider that only Strepsiades, of Aristophanes, chatting amiably with him, understood him by its constant and very frequent intercourse and conversation. And so it says in the Clouds:

The little broth resonates inside like thunder; then  grumbles dreadfully:
at first just gently papax: and then suddenly a sound papappax is produced.
And finally, when I shit, then  pappappapax.

And  Strepsiades does not pronounce these words to fools and stupid, but before this very wise Socrates. So we have proven, Farting Fathers, that the Fart has its own dialect and language standards; so that those wishing with all their  might generate the animosity of all, they accuse  falsely as ingenious culprit of unbridled chatter and clumsiness.
Leave now, Farting Fathers, and murmur who attack with harsh words series the stupidity  and awkwardness of stuttering and confusing language of Fart. ByHercules! he speaks, even he uses three different dialects.At first he said pappax, when most adults "pappappax and when a man" papapappax " 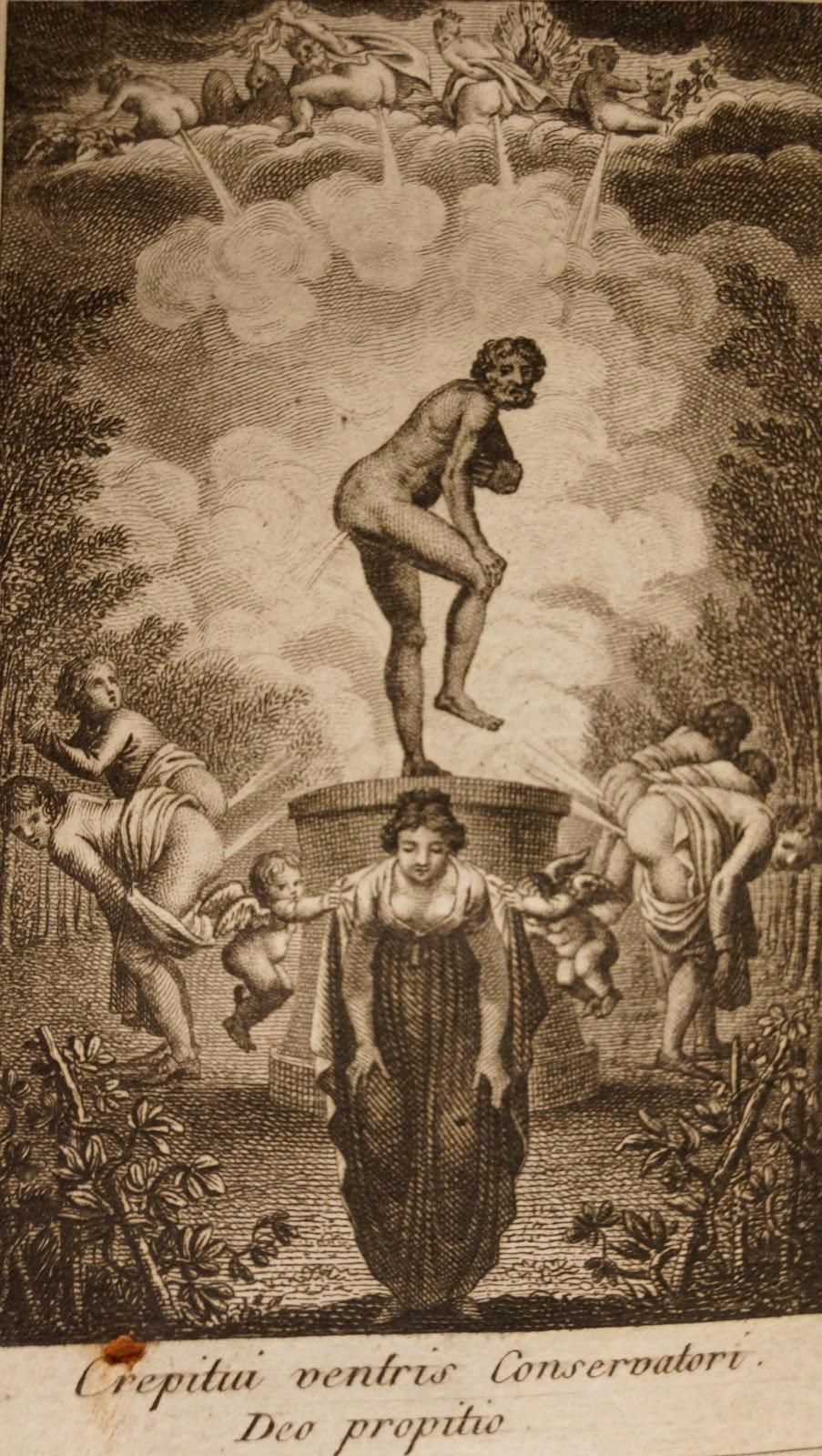 Such as "scatological"  themes were recurrent on Aristophanes himself and on many other ancient authors. It seems as if the grown man should cost  break this stage so characteristic of child development in which the child discovers and seems to delight in these "scatological" issues and that Sigmund Freud placed  between two and four years old. The issue deserves a more extensive and well documented article, which I will write at time. Meanwhile I will state  once more "Nihil novum sub sole" with this picture, named "Sopla", "blow", of Spanish painter Francisco de Goya:

The thunder is the fart of the clouds