We find it striking and curious the usual image of some officials (mostly women) of the Spanish Congress of Deputies, busily transcribing on a paper tape the oral intervention of the deputies. They are shorthand writers or fast writers (actually they are stenographers, as we will clarify later).

This image seems an anachronism to us (from the Greek ἀναχρονισμός, from ανα- , ana– = about, against, and Χρονος, Chronos, time), an unworthy situation of our time when digital technology records images and sounds easily and it even becomes the sounds of a language into letters, that is, into writing; modern shorthand machines exceed two hundred words per minute, which is not bad. Actually, the spectacle of the Congress of Deputies strikes or amazes us, because shorthand has practically disappeared.

We call shorthand to the art, technique or skill to write so quickly that the sound words of a speaking person are faithfully transcribed. The word shorthand, takigraphy,  like so many other techniques, is Greek, from ταχύς, tachis (read "tajís", soon, fast) and γραφία (graphy, “writing”). It is not a mere abbreviation or braquigraphy * (from the Greek βραχύς, brachis, "short" and γραφία, graphy, "writing") because in shorthand the aim is not to gain time or space, but to reproduce the spoken language.

The braquigraphy is the science that studies the abbreviations which are reduced representations of words.

Stenography instead (from the Greek στενος, stenos, narrow), γραφειν (grafein, = write) is a word with an equivalent or very similar meaning. Actually the stenography transcribes signs and no complete words. But we shouldn´t confuse it with the stenotype (from the Greek στενος, stenos, narrow and τύπος, typos, seal, label, mold) that, although it´s very similar, is based on the use of a machine with a small number of keys that can be pressed simultaneously and allow to transcribe complete syllables and words in order also to reproduce the oral speech of a speaker. Modern stenotype machines are computing machines that allow digital recording.

We do not know whether the art of writing fast was first used by the Greeks. A somehow shorthand system to take notes is attributed to Xenophon which was used by him later in his Memorabilia, Memories of Socrates (Απομνημονεύματα, in Latin, Memorabilia) to write the biography of the Greek philosopher. This would give a great value to those notes, as Socrates did not write any text.

In any case, the Romans used it in forensic life, in judgments and speeches, and in the administration, since the year 63 BC, information according to Plutarch himself.

This is the only speech of Cato which has been preserved, we are told, and its preservation was due to Cicero the consul, who had previously given to those clerks who excelled in rapid writing instruction in the use of signs, which, in small and short figures, comprised the force of many letters; these clerks he had then distributed in various parts of the senate-house. For up to that time the Romans did not employ or even possess what are called shorthand writers, but then for the first time, we are told, the first steps toward the practice were taken. (Tr. by Bernadotte Perrin)

This is the famous conspiracy of Catalina, which Cicero the consul disrupts.

Precisely in Antiquity are famous the so-called “Tironian notes” (notae tironianae) which the Secretary of Cicero, Marcus Tullius Tiro, slave first and then freeman or manumitted slave, transcribed the speaker´s speeches with. Naturally, they are called after him. Tiro was probably a slave of Cicero´s family, who served him as secretary, who was later manumitted and who Cicero treated like a family member. This Marcus Tullius Tiro was also who edited numerous speeches of the great orator. His notes, that I comment next, were still used, with several modifications, throughout the Middle Ages, especially by the monks who copied manuscripts and documents. In fact, we only know them from medieval manuscripts and texts, as long as we have no original Roman document about them.

Dio Cassius in his History of Rome, 55.7.6 says with regard to Maecenas:

He was the first who established in Rome a place to swim in warm water and also the first who imagined or envisioned the "notes" to write quickly and he made his freedman Aquila teach them to others.

Tironian notes consist of letters of the alphabet, simplified and modified to achieve greater speed in their writing. They have two elements: a radical or main sign and an ending or auxiliary sign indicating the tense or the case of nouns and adjectives.

Saint Isidore of Seville (Etymologies I, 22 and 23) refers to them:

(22) Ennius was the first to create a thousand and a hundred vulgar notes. Notes were used so copyists could write everything that was said at the meetings, assemblies or in the courts, attending several copyists at the same time, dividing the parts themselves, and how many words and in what order each one should collect or pick them up. Tullius Tiro, Cicero's freedman, was the first to talk about these notes in Rome, but only about those referring to prepositions. After him, Vipsanius, Filargius and Aquila, freedman of Maecenas, added others each. Later, Seneca, with the agreement of all, classified them and increased their number reaching his work at five thousand. They are called "notes" because they recorded or wrote the words and syllables with preset characters and later they remade them for the information of readers. Those who learned them were already and quite properly called "notaries”.

(23) However, in law books certain letters are “notes” of their words to make writing faster and shorter. For example, they wrote B and F for "bonum factum", S and C for "Senatus Consultum", R and P for "republica" (Republic), P and R for "populus romanus", D and T for "dumtaxat", letter W up for "mulier", letter P in its usual shape for "pupillus" and the P upside down for "pupilla", a K for "caput", two KK together for "calumniae causae", I and E for "iudex this", D and M for "Dolum malum". In ancient books we find many similar notes. The new emperors ordered to abolish these notes in law codices, books and texts because with them malicious mind persons deceived or cheated the ignorant people and therefore they ordered that all the letters should be written in the laws so as not to give rise to any error, no ambiguity, and so they showed clearly what must be fulfilled and what must be avoid.

Tironian notes, of which we have got what is called the Lexicon Tironianum, from Roman times, but of which we only have copies since the tenth, eleventh centuries, were about four thousand, but they managed to be approximately 14,000 in medieval times. 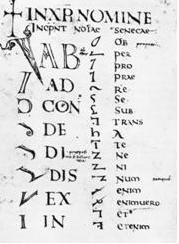 Picture of the start of an edition of the "Notae Senecae"

Form and shape of some Tironian notes

The comment of the sign &, whose origin is without doubt in the unions of letters of the Tironian notes, helps us to understand better and come a little bit closer to what these notes have been. The name of this sign in Spanish is "et" because it is a graphical alternative way to this conjunction, from which it derives our conjunctive "y". In English it is called "ampersand", from the saying or expression "and per se and", meaning "and Practicing Self, and" (that is, “and by itself, and”).

These are various forms ranging from the centuries II-IV, from the Roman cursive to the Carolingian lowercase letter from the ninth century, and which evidence the origin of the ligature "et":

Another example that shows how the bound form derives from the Italic "et":

In Spanish texts it is not used since it involves no economy on "et", but in ancient texts it can be found the expression &c. or &cetera as an abbreviation of &c. or &cetera, et caetera (and the rest), from our etcetera comes from.


We do not comment on the extensive use that it is made of the ampersand sign (&) in modern computer languages.