The Spanish word “ruido” (noise) comes from the Latin word “rugidus”, from where also comes the cultism “rugido” (roar/ roaring noise). The noise is an unpleasant sound to the ear and an annoying sound for the spirit. There are therefore numerous associations and movements that fight against what is also called “acoustic pollution”.

Actually we live in a very noisy society and culture due to the constant movement we are subjected to, that is, due to the work and industrial activity and to some social customs like our interest in music and crowed outdoor concerts that are usually held.

We can think, and no doubt that it would be accurate, that people´s life in the ancient times was generally quieter and calmer, much less noisy that the current one, but this in no way can mean they didn´t also suffer the consequences of annoying and unnerving noises.

Somehow interested in knowing more about the impact of the noise on ancient people´s life I have been gathering diverse information. There are many texts that inform us about it.

One of the most known and quoted texts is the one which refers to Sybaris, Greek city in southern Italy where apparently, around the year 600 BC, the practice within the city of different professions would have been prohibited, such as blacksmith, boilermaker, or carpenter who, with his hammer and noise, disturbs the sleep and rest of the citizens; it seems that the roosters breeding, which early announce the new day, would have also been banned.

We are informed, for example, by Athenaeus of Naucratis (centuries II-III A.D.), in his book "The Deipnosophistae, XII 518 C-D", which means "dinner-table philosophers" or perhaps "authorities on banquets", (that is known and cited with these titles). He tells us about it in XII 518 C-D. See:

No wonder, then, that Sybarites, as well as inhabitants of Sybaris, is also used to designate any person of exquisite taste and pleasure lover.

Popular imagination has attributed or awarded numerous extravagances to the “Sybarites” and maybe the mentioned ones are some of them we must give little credit to, but the fact that the people of the ancient times refer to them is evidence that the noise was also a worry at that time and somehow we might consider the mentioned banning as the first case of acoustic protection pre-legislation.

Very well known and quoted is also the poem 57 of Book XII of Epigrams by the satirical poet Martial, from Hispanic origin, where he tells us how when he is fed up, sick and tired of the many noises of the city , Rome , he goes to his small farm in the field.

It is also quoted a letter from the naturalist and philosopher Seneca, from Hispanic origin too, to his friend Lucilius, in which he complains bitterly about all the noise he has to suffer to live just above the baths, which Romans were so fond of. This is letter number 56 "Ad Lucilium”.

Less mentioned are some verses by the also satirical poet Juvenal in which he complains about the noise the wheels of the carriages make at a crossroads. It does it in Saturae, III, 236-237.

But the more widely quoted text certainly is one by Pliny the Elder (23-79), the naturalist who died as a victim due to his curiosity in the eruption of the Vesuvius Mount that destroyed Pompeii, where he allegedly states in his book Naturalis Historia (Natural History) that the people who live next to the Nile River cataracts are deaf as a result of the bellow and noise the water causes as it falls.

The passage is quoted in hundreds, perhaps thousands, of books, articles, blogs, web sides, documents from different institutions, medical associations ‘documents, associations of lawyers, citizens, hospital departments and even in some doctoral thesis. But none of them gives the precise reference of the text, indicating the particular book from the 37 books that make up Pliny´s whole work (Natural History) nor the chapter or paragraph.

It´s only pealed and repeated again and again a general reference or statement that in English is generally "Pliny the Elder in his Natural History mentions persons living near the Nile cataracts became deaf".

In some cases the information is completed by adding a generalizing "all inhabitants" and some even specify that "Pliny observes" as if he had personally watched them, or still more because some authors, in their desire to concretion, report that they were fishermen from the area, but in no case giving specific reference, as it is required whenever ancient and modern texts are quoted.

I have tried to locate on my own the particular passage, the “topos” or place where Pliny makes this statement. I humbly confess that I have not found it, in spite of having revised each one of the 37 books, (in the ancient sense), which form, as I said, the encyclopedia of Pliny. Therefore I would be very grateful to anyone who could give me this information, that I'm afraid it's wrong.

Soon I suspected about the mistake of this quote which attributes to Pliny a statement in his Naturalis Historia that does not really exist. My suspicion was confirmed by the happy discovery of a curious book by Abbe Secundo Lanncellotti entitle "Farfalloni de gli Antichi Historici" (nonsense, piffles of the ancient historians) published in Venice in 1636 in which he criticizes what he considers huge mistakes or blunders made by the ancient authors and people.

Precisely the second "farfallone" or "nonsense" he talks about is called “Che que  popoli, c’habitano appresso le Catadupe del Nilo sieno tutti sordi” (The one about the people living besides the Nile Falls are all deaf) .

Abbe Lancelloti does not attribute this statement to Pliny, but Cicero, as I will explain or commentate later, and in the beginning of the comment or statement he says something of great interest to the case we are discussing now that I can´t resist to transcribe literally, in Italian first and, then, in English:

"Ancient writers acquired such a big reputation among subsequent or later writers, and even still nowadays it goes on, that not only of Pythagorean but of most of them, like the Ipse dixit is enough. This or that author has said this or that thing; it is true and do not look anywhere else. And so their follies are admired, quoted, transcribed as great wonders”. 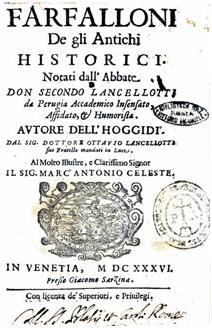 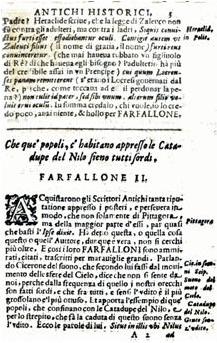 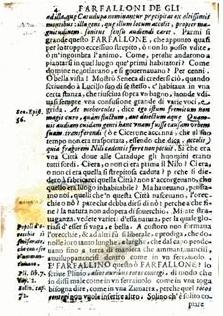 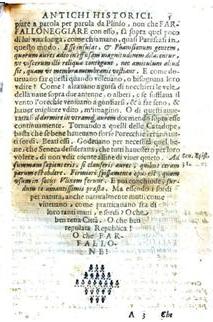 Abbe Lancellotti himself references in this "farfallone" to Cicero (106 BC-43 BC), who in his work "De Republica, 6.19" (About the Republic, 6.9), in the famous passage about Somnium Scipionis (Scipio´s dream), talking about the sound produced by the movement of the spheres of the heaven, says we can´t hear it, because due to their frequency our ears have become deaf and he states that of every sense the ear is the most rude and obtuse one. And he cites as an example to confirm it that of the people who live along the Nile cataracts that have lost their hearing due to the noise of the fall of the river.

Saturated men´s ears with this sound, they deafened; as there isn´t in you rougher sense, like there where the Nile River falls from the high mountains where they are called cataracts, the people inhabiting that place, have no sense of hearing because of the bellow of the noise.

This is really a contrasted quotation. But why has Cicero been less successful among scientists, with hardly any success, that Pliny´s apocryphal quote? Maybe because Pliny´s condition of naturalist and therefore scientist gives him more authority than what a rhetorician as Cicero says, at the far end too loquacious as a good lawyer.

But the fact that Cicero quotes it is proof enough that this opinion, crazy according to Lancellotti, was widespread among educated people of Rome of the first century BC.

Well, back to Pliny we will say that in his remarkable encyclopedia Natural History he refers, of course, to the Nile Falls and even to their deafening noise, but by no means in the terms in which it does the quote we are discussing.

Then, after crashing with some islands, and interrupted by many other obstacles, finally enclosed by the mountains, is pushed like a flood, the waters accelerated to the point of the Ethiopians, which are called Catadupas (cataracts); locked again in a channel between rocks, it is believed that it does not flow but plunges with an immense bellow.

This one conquered cities….. Attena, Stadisse, where the Nile River, rushing, removes with its clash the hearing from its inhabitants. He also conquered Napata.

Otherwise other authors state the same, like Seneca himself (4 BC-65 AD), who refers in his Quaestiones Naturales (Natural Questions) 4, 2, 5 to the cataracts of the Nile and its deafening noise:

"… Finally, overcome the obstacles, without ground, it falls into a huge deep with huge bellow of the place. A colony, placed there by the Persians, could not stand the noise, canceled their ears by the continuous roar, so they had to be moved to another quieter place. "

By the way, this idea of the translation of the colony or city is repeated by Seneca himself in the famous LVI Epistle to Lucilius cited above.

It’s not easy to understand how a questionable or doubtful quotation is profusely made while several others, which confirm what at the far end is aimed, however aren´t used: that the ancient Greeks and Romans were aware of the damages a high level of noise represents to the hearing, both produced by the human being or nature.

Nor it is easy to understand how a quote has been mentioned, alleged and used as “argument from authority” without checking its true existence first.

At least from all this we draw some conclusions:

1. The “argument from authority “must be based primarily on real and proven sources. That is, there must be the source.

2. The sources, despite their author having much authority, must be subjected to textual criticism and also to scientific contrast. The scientific errors existed both in antiquity and today too, even published by prestigious authors and scientific journals.

3. Multiplication and repetition of the same quote (easy task nowadays with computer media) does not increase its authority; if the quote does not really exist, what it shows is how little rigor we usually act with.

The roaring noise which the high waterfall roars with