Alexander the Great, at the age of 32 years ( he only reigned for 12 years) had conquered a huge empire; he had taken over all Greece and the Persian Empire and he had arrived to India; he had conquered Asia Minor and Egypt; he had founded dozens of cities, which he named Alexandria, the most famous was that one in Egypt. He had become a mythical being, about whom dozens of biographies and stories, some true and some fantastic, were written.

Well, Lucian of Samosata has a very interesting little book entitled, (probably he did not call it by this name; it should be called "laudatory history of the recent war against the Parthians") " The Way to Write History”.  Among the several tips,it interests me now highlight two fundamental: first and foremost that history must to respect the true facts objectively; the second one is to avoid all flattery, which only serves to make  ridiculous the flatterer .

I reproduce the text of the work of Lucian in which he puts  an example of how Alexander rejected angry the overly laudatory fantastic tale of a bad historian. Then I will discuss another curious example where he rejected the adulatory proposal of an architect. It is very interesting to see that Alxander, so young but  an unparalleled hero,   almost a god, before whom the East, following its uses, kneel  and whom his soldiers followed blindly, this "demigod " is enough  human and sane  to despise the flatterers. See http://www.antiquitatem.com/en/proskynesis-bow-monarchy-persians

Eulogy, I need hardly say, may possibly please one person, the eulogized, but will disgust every one else; this is particularly so with the monstrous exaggerations which are in fashion; the authors are so intent on the patron-hunt that they cannot relinquish it without a full exhibition of servility; they have no idea of finesse, never mask their flattery, but blurt out their unconvincing bald tale anyhow.
The consequence is, they miss even their immediate end; the objects of their praise are more inclined (and quite right too) to dislike and discard them for toadies — if they are men of spirit, at any rate. Aristobulus inserted in his history an account of a single combat between Alexander and Porus, and selected this passage to read aloud to the former; he reckoned that his best chance of pleasing was to invent heroic deeds for the king, and heighten his achievements. Well, they were on board ship in the Hydaspes; Alexander took hold of the book, and tossed it overboard; ‘the author should have been treated the same way, by rights,’ he added, ‘for presuming to fight duels for me like that, and shoot down elephants single-handed.’  (Translated by Fowler, H W and F G. Oxford: The Clarendon Press. 1905)

The story of Lucian follows immediately with another example of the wisdom of the young Alexander at the proposal of an architect who certainly seemed preposterous and simply flattering. We seem impossible task to convert an entire mountain, the Athos, in the effigy of Alexander. However we can imagine how the muntain, now occupied by a famous monastery,  could have been, watching what 2300 years later (1927-1941) Gutzon Borglum made on Mount Rushmore in Keystone, South Dakota, in which 400 workers carved the faces of the first four of  presidents of United States, George Washington, Thomas Jefferson, Theodore Roosevelt and Abraham Lincoln. It is the group called Mount Rushmore National Monument . 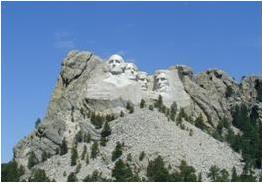 A very natural indignation in Alexander, of a piece with his treatment of the intrusive architect; this person offered to convert the whole of Mount Athos into a colossal statue of the king — who however decided that he was a toady, and actually gave him less employment in ordinary than before.

The Roman architect Vitruvius also reminds us this story and tells us that the architect was called Dinócrates, in his De architectura, II,1-4:

1. Dinocrates the architect, relying on the powers of his skill and ingenuity, whilst Alexander was in the midst of his conquests, set out from Macedonia to the army, desirous of gaining the commendation of his sovereign. That his introduction to the royal presence might be facilitated, he obtained letters from his countrymen and relations to men of the first rank and nobility about the king's person; by whom being kindly received, he besought them to take the earliest opportunity of accomplishing his wish. They promised fairly, but were slow in performing; waiting, as they alleged, for a proper occasion. Thinking, however, they deferred this without just grounds, he took his own course for the object he had in view. He was, I should state, a man of tall stature, pleasing countenance, and altogether of dignified appearance. Trusting to the gifts with which nature had thus endowed him, he put off his ordinary clothing, and having anointed himself with oil, crowned his head with a wreath of poplar, slung a lion's skin across his left shoulder, and carrying a large club in his right hand, he sallied forth to the royal tribunal, at a period when the king was dispensing justice.
2. The novelty of his appearance excited the attention of the people; and Alexander soon discovering, with astonishment, the object of their curiosity, ordered the crowd to make way for him, and demanded to know who he was. "A Macedonian architect," replied Dinocrates, "who suggests schemes and designs worthy your royal renown. I propose to form Mount Athos into the statue of a man holding a spacious city in his left hand, and in his right a huge cup, into which shall be collected all the streams of the mountain, which shall then be poured into the sea."
3. Alexander, delighted at the proposition, made immediate inquiry if the soil of the neighbourhood were of a quality capable of yielding sufficient produce for such a state. When, however, he found that all its supplies must be furnished by sea, he thus addressed Dinocrates: "I admire the grand outline of your scheme, and am well pleased with it: but I am of opinion he would be much to blame who planted a colony on such a spot. For as an infant is nourished by the milk of its mother, depending thereon for its progress to maturity, so a city depends on the fertility of the country surrounding it for its riches, its strength in population, and not less for its defence against an enemy. Though your plan might be carried into execution, yet I think it impolitic. I nevertheless request your attendance on me, that I may otherwise avail myself of your ingenuity."
4. From that time Dinocrates was in constant attendance on the king, and followed him into Egypt; where Alexander having perceived a spot, at the same time naturally strong, the centre of the commerce of the country, a land abounding with corn,º and having those facilities of transport which the Nile afforded, ordered Dinocrates to build a city whose name should be Alexandria. Dinocrates obtained this honour through his comely person and dignified deportment.

Vitruvius ends, not without irony, the passage with these words:

But to me, Emperor, nature hath denied an ample stature; my face is wrinkled with age, and sickness has impaired my constitution. Deprived of these natural accomplishments, I hope, however, to gain some commendation through the aid of my scientific acquirements, and the precepts I shall deliver. (Translated by Joseph Gwilt, London: Priestley and Weale, 1826)

Plutarch also gives us news of the story, but now the architect is called Estasícrates. Alejander want to make a grand tomb for his friend Hephaestion, who has just died, and he calls the architect cited; he tells us in his Alejander, 72.3-4

Upon a tomb and obsequies for his friend, and upon their embellishments, he purposed to expend ten thousand talents, and wished that the ingenuity and novelty of the construction should surpass the expense.He therefore longed for Stasicrates above all other artists, because in his innovations there was always promise of great magnificence, boldness, and ostentation.
[4] This man, indeed, had said to him at a former interview that of all mountains the Thracian Athos could most readily be given the form and shape of a man; if; therefore, Alexander should so order, he would make out of Mount Athos a most enduring and most conspicuous statue of the king, which in its left hand should hold a city of ten thousand inhabitants, and with its right should pour forth a river running with generous current into the sea. This project, it is true, Alexander had declined; but now he was busy devising and contriving with his artists projects far more strange and expensive than this. ( Plutarch's Lives. English Translation by. Bernadotte Perrin. Cambridge, MA. Harvard University Press. London. William Heinemann Ltd. 1919. 7. ).

Anyway, today also and too often they are a good match the megalomania of policymakers with that of the artists.

Note: megalomania is a word composed by  the Greek μεγαλο- from μέγας, large, and μανία, insanity, which therefore means "delusions of grandeur".

He proposed (Alexander) to model Mount Athos with his effigy