According to the moralist scheme of Roman historians and educators, the ancient inhabitants of Rome were austere farmers, who then became addicted to the pleasures and they were corrupted influenced by Greek and Asian luxury after the Punic Wars and the conquest of Greece and East.

Among the many pleasures to which they became accustomed certainly they include bathrooms, good food and love, ie the pleasures of the flesh. Of them by some extent, the word "bath" or "hot springs" (thermae) is almost synonymous with "Roman culture" because it is no city or urban or private group of some importance that does not have  good bathrooms supplied by spectacular aqueducts.

Numerous literary texts that sing these three pleasures as humans, to praise them or to criticize  their practice and amoral abuse, because it is very different from the "mores" or ancient customs. But the topic of "baths, wine and Venus, (ie, love or sex or women in a common sexist language today unacceptable and criticized), to which is sometimes added "the food ", spread to all social classes to become this popular, a popular version of the famous "carpe diem" of Horace. See: http://www.antiquitatem.com/en/carpe-diem-horace-poetry-epicureism

In the case of "pleasure of drinking," vina", remember the famous phrase "felices hispani,quibus vivere est bibere", which I already devoted an article. See: http://www.antiquitatem.com/en/felices-hispani-quibus-vivere-est-bibere

It is well known and cited one couplet of an epitaph appeared in Roma, referenced in the Corpus Inscriptionum Latinarum (CIL) with the number 15258, or in Carmina Latina Epigraphica (CLE) with the number 1499, or in Inscriptiones Latinae Selectae (ILS) 8157 = CLE 1499, that synthesizes this "hedonistic" proposal.

This is an example of what some anthologies and literary precepts called "serpentine verse", in which the end of the verse or couplet is the same as the first, as the snake biting its own tail, like this one of Juvenal , 14, 139:

"As money increases, so does love of money."

Some also speak in these compositions  as "chiasmus" or composition in "X", from the Greek χιασμός (chiasmos), the Greek name of the χ letter X, pronounced "chi, qui,".

The inscription above corresponds to a tombstone or epitaph appeared in first-century in Rome that  Merope dedicates to his partner Tiberius Claudius Secundus, who lived the not inconsiderable amount of 52 years, with the next really beautiful couplet:

“He lived 52 years.
To the spirits
of the departed Tibrius Claudius Secundus.
Here he has everything with him.
“bathing, wine, sex ruin our bodies,
but bathing, wine and love
make life worth living”.
Merope, freedwoman of Caesar
made this for her dear companion,
herself and their family and their descendents.” 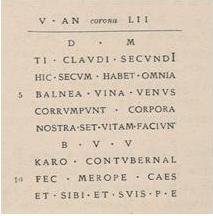 Photograph of the text as appear in the Corpus Inscriptionum Latinarum.

It is certainly a well popular maxim in the ancient world. For example it also appears in a bilingual inscription of Gallipoli, now Turkey, on a spoon with the same hexameter: Carmina Latina Epigraphica (CLE) 1923; (CIL III 12274c); (In the edition of Carmina Latina Epigraphica, post Editam collectionem Buechelerianam in lucem prolate Conlegit Einar Engstrom, 1912 p.42, No. 148..):

Another epitaph of the third century A.D., of Ostia, also includes the couplet with some variation that expresses self-satisfaction or perhaps complacency and boasting of whom has had a good life. Consider the fact that the deceased is often in the first person, who addresses the still alive, adds a sarcastic tone if not black humor.

“To the spirit of the departed C.Domitius Primus. I, the well-known Primus, am in this tomb.  I lived on Lucrine oysters; I often drank Falernian wine. Baths, wine, and  love aged with me through the years. If I managed this, may the earth be light on me. Yet among the spirits, the phoenix, which hastens to renew itself along with me, saves me on the altar. Space granted  for the burial of C.Domitius Primus by the three Messii –Hermeros, Pia y Pius.”

Transcription of the text and photo in the CIL

“The flower is dear to travelers: bathe, drink, eat, fuck, for you bring none of these below (to Hades)”

The fact that this maxim appears in epitaphs gives added value because we can interpret it as an objective statement of a bon viveur or epicurean, not without black humor.

These latest inscriptions added to the pleasures of bathing, drinking and enjoying the love of eating, some way implicit in that of "drinking". There are also many examples where the pleasure of eating and general invitation to the good life is highlighted. All this is certainly prolonged and increased during the Middle Ages and then by the rigidity of Christianity, which seeks to impose fasting and abstinence. The popular, skeptical, epicurean or hedonistic answer is "let us eat and drink, for tomorrow we come to die." But this requires a separate article, which at some point I will, because the examples of inscriptions referred to it are numerous.

Actually this maxim and similar are rooted in the anonymous Greek epigram of the Anthologia Palatina, 10,112 (collection of Greek poems, usually brief, from classical times to the Byzantine).

Note: the word "anthology" derives from the Greek ἄνθος, anthos, 'flower' and λέγω 'to select',  and it means  "flower selection" just like the Latin "florilegium", posy.

As I said, the sentence continues in the Middle Ages to the present day. Interestingly, it seems that since the Middle Ages has diminished if not disappeared fondness for baths and  hygiene in general; this pleasure  does not seem to recover well to contemporary times with the proliferation of SPAs. See:

But if it disappears reference to the baths, numerous variations, which in many cases show a clear condemnation and a moralizing proposal,  usually are present. I will cite just one example in Spanish of a compendium of the eighteenth century:

In the section EEGANTIAE SIVE  CATONIANA carmina memoria perpetuo tenenda, which begins on page 320, there are since page 329 entitled In peccatorem (for the sinner). Well, at p. 330 he devotes a few couplets to the sins of love and wine; among others:

The bathrooms, wine, Venus (sex) are the true poisons of virtue.
To that virtue this strong, flee wine and Venus

But eliminated the component bathing or hygiene by water, the conjunction of “vina” and Venus, wine and love (wine and women in their most popular and sexist version) has potent remained until today, since the frequency of occurrence in numerous operas, to use less artistic in folk songs.

I will cite just the famous toast of the Traviata:

Let's drink, drink from the joyful chalices
since the beautiness is blossoming.
And might the fleeting hour get inebriated at will
Let's drink among (those) sweet quivers
that Love makes arise,
since that eye goes to (his) almighty heart.
Let's drink, (my) love, (so that) love among the chalices
will get hotter kisses

[Chorus] Ah! Let's drink, (so that) love, among the chalices, will get hotter kisses

With you, with you, I'll be able to share
my cheerful time;
Everything is crazy, crazy in the world
what is not pleasure
Let's enjoy (the pleasures), fleeting and fast
is the joy in love,
it's a flower that blossoms and dies,
neither it can be enjoyed longer
Let's enjoy, it's calling us, it's calling us an ardent
flattering accent.

Let's enjoy, the cup* and the canticle,
the lovely night and the smiles;
might the new day find them (still) in this paradise

[Violetta] Life is in (its) jubilation

[Violetta] Don't say it to those who don't know it,

[Alfredo] So it's my destiny

Let's enjoy, the cup* and the canticle,
the lovely night and the smiles;
might the new day find them (still) in this paradise.

I will also reference, by contrast, the very sexist and insufferable Spanish pasodoble of Manolo Escobar,  of remarkable success in Spain at the time, entitled "Women and Wine", whose chorus, related to the content of the article, I would play (I find it impossible to quote the rest of the lyrics of this pasodoble, even to reject it as absurd and of infamous literary quality.):

Note: "infamous" is a word derived from Greek φημί, (to talk), in-femi (ie, no-talking), which therefore means etymologically "unspeakable, unpronounceable, unworthy to be said,", because  the noble sentiments, such as patriotism, must be proclaimed but in the right way and in the right context, because if not their dignity is undermined.

Long live wine and women!
and the roses that heat our sun!
Long live wine and women
for they are the gifts of the Lord!
And long live every corner of my homeland.
Long may they live together as one!
Forming our flag
and the armour of my Spain.
(Translated by http://lyricstranslate.com/es/mujeres-y-vino-women-and-wine.html#ixzz44mZRzQM7)