Astronomers, along with medical doctors, were certainly the best scientists valued in antiquity. Largely they are confused with “astrologers” and “healers”, two activities connected with religion and the life of the temples.

In the Greco-Roman world  astronomy (currently defined as "The science that is as it relates to the stars, and especially to the laws of their movements") and astrology (currently defined as "Study of the position and movement of the stars through whose interpretation and observation it is to know and predict the fate of men and predict terrestrial events. ") are confused, they are the same science. So the myths and beliefs that come from the mists of time are mixed with  it that reason and science is finding out . But gradually astronomy she was expressed in mathematical and geometric language without thereby the "astrology" disappear.

Today, these scientists professionals who also study the space  are highly valued. Who is not awed by the imaginative theories, impossible to understand for those who are laymen on these issues, the big bang, or by the beautiful received images with waves originated from thousands of light years?

But gradually the science was more independent from  myth and religion. In the case of astronomy it was becoming mathematics and physical astronomy and geometry astronomy, able to understand and anticipate the movements of the stars. Thus scientists freed or tried to liberate men from fear of the gods, caused by natural phenomena.

To free  people from fear, that are instilled by natural phenomena which they did not know, was the essential objective of the Epicureans, who already since antiquity were present unjust and selfishly as "hedonistic" greedy pleasures, when the only thing they  were eager was "reason”  and "common sense".

Lucretius says in his grand treatise on "science" in verse "De Rerum Natura", "On the Nature of Things", praising the great figure of the master Epicurus at the beginning of his work:

Whilst human kind
Throughout the lands lay miserably crushed
Before all eyes beneath Religion- who
Would show her head along the region skies,
Glowering on mortals with her hideous face-
A Greek it was who first opposing dared
Raise mortal eyes that terror to withstand,
Whom nor the fame of Gods nor lightning's stroke
Nor threatening thunder of the ominous sky
Abashed; but rather chafed to angry zest
His dauntless heart to be the first to rend
The crossbars at the gates of Nature old.
And thus his will and hardy wisdom won;
And forward thus he fared afar, beyond
The flaming ramparts of the world, until
He wandered the unmeasurable All.
Whence he to us, a conqueror, reports
What things can rise to being, what cannot,
And by what law to each its scope prescribed,
Its boundary stone that clings so deep in Time.
Wherefore Religion now is under foot,
And us his victory now exalts to heaven.

This terror, then, this darkness of the mind,
Not sunrise with its flaring spokes of light,
Nor glittering arrows of morning can disperse,
But only Nature's aspect and her law,
(Translated by William Ellery Leonard, 1916)

A good example of this long road towards science is the astronomer Geminus and his "Introduction to the phenomena".We know very few things about him, such as he lived between the first (I)  centuries before and after Christ. Astronomy for centuries was a branch of philosophy. Geminus talks of  physics because everyone who deals with nature (physis) is phisyc, but in I century B.C., astronomy is becoming more specialized and emancipating as "mathematical astronomy", based on mathematics and geometry and moving towards a positive science. Geminus is a professional astronomer seeking demonstrative rigor of mathematics and therefore he despises making weather forecasts based on the rising and setting of the stars.

Another high exponent is Ptolemy, author, among other works, of the "Almagest", word  which is simply the Arabic transliteration of the Greek title Megisté Sýntxis (The great coordination), based on the understanding of the movements and orbits of the stars.

Well, another great scientist who could be called "general" and "communicator", Pliny the Elder, who wrote a great encyclopedia, a compendium of scientific knowledge of his time, which read with attention, is not without truly scientific critical thinking, emits a beautiful view on the scientific value of the astronomers in his Natural History, II, 12 (54):

These were indeed great men, superior to ordinary mortals, who having discovered the laws of these divine bodies, relieved the miserable mind of man from the fear which he had of eclipses, as foretelling some dreadful events or the destruction of the stars. This alarm is freely acknowledged in the sublime strains of Stesichorus and Pindar, as being produced by an eclipse of the sun. And with respect to the eclipse of the moon, mortals impute it to witchcraft, and therefore endeavour to aid her by producing discordant sounds. In consequence of this kind of terror it was that Nicias, the general of the Athenians, being ignorant of the cause, was afraid to lead out the fleet, and brought great distress on his troops .

Hail to your genius, ye interpreters of heaven! ye who comprehend the nature of things, and who have discovered a mode of reasoning by which ye have conquered both gods and men!

For who is there, in observing these things and seeing the labours which the stars are compelled to undergo (since we have chosen to apply this term to them), that would not cheerfully submit to his fate, as one born to die?  (The Natural History. Pliny the Elder. John Bostock, M.D., F.R.S. H.T. Riley, Esq., B.A. London. Taylor and Francis, Red Lion Court, Fleet Street. 1855.)

Ovid also  appreciates the extraordinary courage of those who studied the stars, in Fasti, I, 295 et seq .:

What is to stop me if I should tell also of the stars, their risings and their settings? That was part of my promise. Ah happy souls, who first took thought to know these things and scale the heavenly mansions! Well may we believe they lifted up their heads alike above the frailties and the homes of men. Their lofty natures neither love nor wine did breaks, nor civil business nor the toils of war; no low ambition tempted them, nor glory’s tinsel sheen, nor lust of hoarded pelf. The distant stars they brought within our ken, and heaven itself made subject to their wit. So man may reach the sky: no need that Ossa on Olympus should be piled, and that Pelion’s peak should touch the topmost stars. Under these leaders we, too, will plum the sky and give their own days to the wandering signs. (Translated by Frazer, James George. Loeb Classical Library)

Attempts to explain the stars and their movements, theoretical and practices speculations that incorporate and develop knowledge of mathematics and geometry, indeed pose a real scientific effort at the start of the path that led to the great current knowledge, that yet so much still unknown, but they want  to know..

On the background photo obtained by the Hubble  which Stephen Hawking has on the cover of his Facebook page, we will conclude with Manilius: 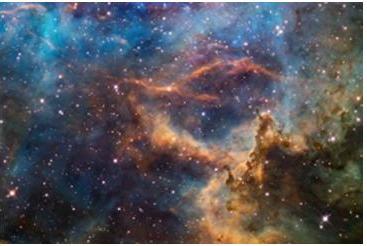 ...there will always be a matter of debate for the intelligence of men and there will always remain the dark about what is hidden and far above man and God.  (Manilius, Astrologia, I, 145…)

Astronomers were the most highly valued scientists in antiquity