Who enjoys reading or listening to the colorful stories of the Greco-Roman mythology he has an essential work for this: Ovid’s Metamorphoses. In this work the prolific poet tells us many cases of transformation or metamorphosis of men, women or mythological characters in other beings.

Among these transformations  they are especially interesting the conversions to stars, called Catasterisms, not least because the force to survive.

We call "Catasterismi" the conversion or transformation of gods, heroic beings, mythological events, and even ethical principles later, in stars, celestial bodies in the sky, or clusters of stars.

This is a technical or cult Greek term, composed of the preposition kata, κατά (above, below) and the noun ἀστήρ, aster, (star). The term was used as a title of a booklet attributable to the director of the Library of Alexandria, the mathematician, geographer, astronomer, physician, scholar, literary author, Eratosthenes.

The poet Ovid tells us literally  in a long story of more than a hundred and fifty verses in Metamorphoses, Book II, v. 401-550.

Today I let a small license that surely would not bother  Ovid; in the ancient world the same mythological subject is recovered  and modified, reduced or enlarged again and again by various authors.

Let me make a smaller version of Ovid's story that may be easier to read than the original text for possible current readers, but I will offer at end to the interested reader  the complete Latin text of the author with its translation.

Jupiter, the powerful god, walked vigilant the broad and clear sky and reluctantly watched the land where men live. In his daily trips across the sky stopped many times in Arcadia, fertile region of the earth especially dear to him, governed by Licaón, cultured and religious king, respected by his citizens who he finally civilized, forcing them to abandon their way of  primitive and rude life.

Licaón had numerous children and among them a daughter named Callisto. Her extraordinary beauty attracted the loving attention of Jupiter, who  too often betrayed his wife Juno.

Lycaon’s daughter neither liked the comfortable life of the palace nor occupied the time carding  wool nor perfuming  her  body of fine forms. Tied her messy hair with a white ribbon and tied her dress with a slight brooch, armed with the curved bow and pointed arrows at her shoulder, she crossed the lush forests accompanying Diana, virgin goddess, free and accurate huntress.

A hot summer day, when the sun was halfway through his walk , Callisto rested lonely lying in the green forest floor, laying her head on the multicolor quiver. When Jupiter saw her so beautiful and defenseless, burning with the passion like only gods can burn, he thought:

— My wife Juno will not know about this secret love

And taking the figure of the goddess Diana she approached to Callisto:

– Beautiful maiden,  you have hunted today extraordinarily and in accurate way.

Callisto got up swiftly jumping and responded with grateful words:

– Thank you, my dear and beloved goddess. I think you're bigger and stronger than Jupiter himself, who does not hear us.

Jupiter smiled, listening her and held her tightly against his powerful chest and filled her with lascivious kisses and inappropriate to the virgin goddess whose figure he had supplanted.

Callisto wanted uselessly to released herself out of the divine embrace, conscious of the adulterer deception. But who can beat the mighty Jupiter?

When insensitive Jupiter flew to the ether, Callisto picked up his bow and quiver and ran away fast from the accomplice and forever odious forest.

A certain day, after a good hunt, Diana, happy and contented, call Callisto, who, fearing that she were Jupiter, again disguised, runs away to hide in the thick forest. But when she sees the goddess surrounded by her nymphs preventing the deception, she walked head down and approached to the group. The flush of her face would betray her injured shame to Diana  if the goddess was not inexperienced virgin.

Fatigued by the long chase, they reached a fresh stream of clear water. Diana just dipped his virgin foot in the fresh water which ran murmuring and said friendly:

– Rest a while. Nobody sees us here; let us undress and refresh our bodies in these crystalline waters.

All nymphs quickly divest themselves of their hunting clothes, but Callisto, blushing again, dilated her nakedness. When she finally took off his clothes, it appeared evident in his body the guilt that she needlessly wanted to hide with her hands.

– Get away fast from us, betrayer, and do not tarnish these sacred waters

The time is passed and the small Arcas was born, fruit  of this forced union. Juno, wife of Jupiter knew long time ago what happened. Now, at the right time, she does not delayed longer her cruel punishment. So the powerful goddess angry said:

– It is not possible, adulteress, that you were fruitful and that your son testify before all the gods the shameful outrage of my husband Jupiter. I soon will take off  the beauty of your body with which you attracted my adulterous husband.

She said it, and she grabs his blond hair and threw she  to the ground with all violence. Callisto tended suppliant her arms, which were covered irredeemably with  black hairs; she spread her hands which became twisted claws and sweet mouth, desired by Jupiter, was transformed into deformed animals jaws. No pleading words came out from her hoarse throat which  would move the heart, but a hoarse roar that arise in terror.

Become into a bear, she retains her previous soul, as it is evidenced by her  constant groans of pain and her hands raised upward, perhaps protesting the unfeeling ingratitude of Jupiter, the father of the gods who intimidates everyone with his rays.

Callisto now wanders the woods in solitude and hazardous fields. Who tirelessly hunted before, how many times now hides herself pursued by the barking of dogs and the arrows of the hunters! Even now being a bear, she is afraid to see the fierce bears on top of the rocks.

Many years passed and Arcas, son of Callisto, whom she did not met, pursues  wild animals through the gorges and forests of Mount Erimanto in the fertile Arcadia.  At certain  day Arcas meets his mother, who seems to recognize him and fixed her black eyes to him. When the mother approaches  unsure the son, she is about to die pierced by the arrow that Arcas placed in his tensioned bow, but the powerful  Jupiter prevented the terrible sacrilege. Snatched from the hard earth, transported through the space, he placed them in heaven, forever changed in two neighboring constellation with bright stars, the "Big Dipper" and "Boötes" (the guardian ofthe  Bear) . 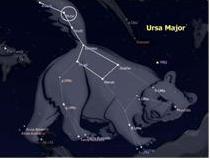