The inhabitants of Pompeii and its surroundings, as all the inhabitants of the Roman Empire in general, were fond of gladiatorial shows in the amphitheater and of racing horses and chariots in the circus or hippodrome.

Note: The word 'amphitheater' is formed from two Greek words amphi, ἀμφι, meaning "two" and Theatrum θέατρον; it is a roughly circular building result of the union of two approximately semicircular theaters.

But the Greeks did not have "amphitheaters"; so we have to assume that the word, though Greek, was created by the Romans. The word "circus", from latin "circus" etymologically means "circle, fence." Hippodrome, from the Greek ἱππόδρομος (ἱππός, hipos, horse and  δρομος, dromos, race, travel). The most famous amphitheater in Rome, the Flavian Amphitheatre, is known as the "Colosseum" precisely because he had before it the statue of the famous "Colossus", Colosseum, Nero statue about 30 or 35 meters. The Spanish word "coso", from "colosseum", means "bull ring".

Rivalries between neighboring cities and team rivalries were sometimes masked in those competitions, sometimes even violent, as it occurs now primarily in football, that raises  true passions.

The violence in stadiums (arena, circus) sometimes reached such proportions that sanctions such as the closure of the field are imposed.

This is that  happened in the year 59 AD, under Nero, in the amphitheater of Pompeii during a show of gladiators offered by Livineius Regulus.

Citizens of the neighboring city of Nuceria attended the show. The insults took the place  of each others bets and  bluffs, the stoning took the places of the insults, the unsheathing of swords took the place of the stoning. The consequences were: the Pompeii won,  but there they were dead; many nucerians  were wounded and maimed.

The Emperor Nero himself, after consulting with the nucerians, commissioned a research to the consuls and punished the culprits: the Senate forbade to  celebrate such shows in Pompeii for ten years; ie,  he closed the amphitheater and those responsible for the game and the instigators of the riot were expelled from the city.

During the period of the ban just games of athletes were held as usual with this type of sanction, Nero have softened the punishment and permitted to open again in 64.

Anyway, since we have a chronicle of the event, it would  better to listen that Tacitus tells us in his Annals, 14.17:

About the same time a trifling beginning led to frightful bloodshed between the inhabitants of Nuceria and Pompeii, at a gladiatorial show exhibited by Livineius Regulus, who had been, as I have related, expelled from the Senate. With the unruly spirit of townsfolk, they began with abusive language of each other; then they took up stones and at last weapons, the advantage resting with the populace of Pompeii, where the show was being exhibited. And so there were brought to Rome a number of the people of Nuceria, with their bodies mutilated by wounds, and many lamented the deaths of children or of parents. The emperor entrusted the trial of the case to the Senate, and the Senate to the consuls, and then again the matter being referred back to the Senators, the inhabitants of Pompeii were forbidden to have any such public gathering for ten years, and all associations they had formed in defiance of the laws were dissolved. Livineius and the others who had excited the disturbance, were punished with exile. (Transl.Alfred John Church. William Jackson Brodribb. Sara Bryant.)

The altercation should have been of such proportions that not only it is told bt the historian Tacitus in his Annals, but there is a wall painting in Pompeii, in the house  I.3.23,  the house known as house of Actius Anicetus, representing the altercation. It can be seen, in addition to the fallen and the litigants, the candle which served to shade the sand on hot summer days.

Among the many graffiti of Pompeii, over twenty thousand, there is one that certainly seems to refer to the episode that I comment. It corresponds to Corpus Inscriptionum Latinarum, IV, 1293 via Mercury.

Campanians, with this one victory, you have lost with Nucerians 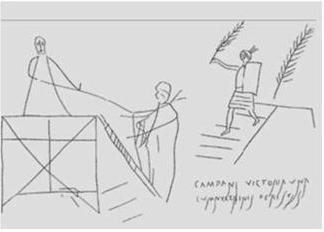 Another graffiti can give us some  idea about the passion with which the residents of the county attending these shows.

Misfortunes to people of Nocera

Why there are rivalries between the neighbor of Pompeii and they of Nuceria? Probably the rivalries are from afar. The neighborhood always is cause for friction. After the Social War of 91-88 years B.C. Sila established a colony at Pompeii. The amphitheater is at that time, from around 70 BC Nuceria, whose people had not rebelled and it was better treated. Then Nero settled a colony of veterans who maybe disputed some land to Pompeii. Moreover, in the reduction of the penalty she may intervene Nero's wife Poppaea, whose family lived in Pompeii. Perhaps it was due to relieve the stress of the city after the earthquake that seriously damaged it in the year 62 AD.

Another graphite reports us that to drinking good wine we should go to Nuceria:

Gaius Sabinus says a fond hello to Statius. Traveler, you eat bread in Pompeii but you go to Nuceria to drink. At Nuceria, the drinking is better.

We could continue mulling more about it, but what for if every day or weekends we still see these fights of fans of different teams in the league, in the Champions League or in any other European or American competition?

It seems as if some of them were doomed to find their identity in confrontation with each other all the time and occasion. Of course then also the games (ludi circus) as today  mass sports are good valves to exhaust the  stress generated in an absurd daily life.

Shows that generate passions and clashes: Pompeii versus Nuceria