Respect for animals and nature in general is a very modern concern. There are numerous ancient texts that involve explicit reflection on the need to respect the “environment”, among other reasons because the ability to destroy or modify was much lower and this probably makes unnecessary that reflection.

But certainly there are numerous references in ancient texts that advise the  man "to live  in accordance with nature", but the point of view of this advice is not focused on nature conservation but in the way of life of the man himself.

Nor is there an explicit awareness of today called "animal rights"; rather, the widespread opinion is rather that the animals, which  do not have souls, at least as human, they do not have "rights".

It is an exception is the belief and vital rule of Pythagoras and his disciples, and several other thinkers  who believe in metempsychosis or transmigration of souls, also in animals and therefore they can not eat animal flesh and they are vegetarians.

Because  all this there are some particularly interesting and shocking texts in the above context, including some laws that obliged to respect and not mistreating loading animals of "cursus publicus" or "state transport service and official communications of the Empire" .

This "transport service" is a remarkable Roman creation attributed to Augustus and developed remarkably in the Empire. There were notable precedents, like the system by changing horses in order to transmit or report messages w created by the Persian king Darius I, on the "royal road", that I referred in http://www.antiquitatem.com/en/post-service-road-mail-cursus-publicus . 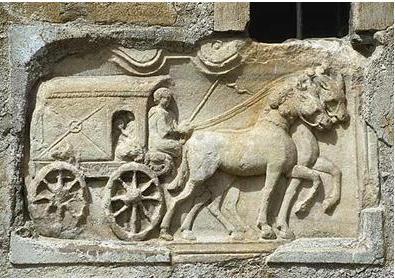 On another occasion I will discuss the issue of cursus publicus at greater length and detail; it is enough  today know that this "public" or state service  was created, not surprisingly, on the structure of the special system of "roads" , "viae", which go  to Rome, "the city par excellence”. Along the way, every twenty or thirty kilometers, there were some stations,  guesthouses or hostels where rest overnight and change animal for transport of passenger or cargo .

Relatively speaking, they were something like our stations or service areas on  our roads and highways.

Among them there are some that require treat well  post and cargo animals.  The most striking of these is the 8.5.2 that prevents excesses and cruelty in the treatment of these animals:

Codex Theodosianus, 8.5.2 The public post animals  (cursus publicus) only should  be forced by  switch  or whips, but not by clubs.

The same Augustus to Titianus

Since many people require at the beginning of their course the public animals to exhaust all the strength they have by knotty clubs, it is my pleasure that no person  in any way shall use a club to spur them, but he shall use either a switch or a whip with a little sting tied in the tip, by which the lazy members may be gently stimulate, but not to try to get everything that forces of animals can not give.
If a person  (soldier) of high gradation  should act against this law, he shall be punished by  humiliation of degradation; if a simple operator (soldier), he shall receive the penalty of deportation.

Give on the day before the ides of May in the consulship of Sabinus and Rufinus.  May 14, 316

This law is from  time of Constantine. The rule punishes the excesses and cruelty in the treatment of animals of  cursus publicus and punishment is depending on the category of offender: if the offender is of no gradation, it is certainly very severe.

Some others laws regulate precisely the weight and burden that the various types of vehicles may to carry and the animals themselves. You can also see in them a tinge of respect and consideration for animals.

We determine that the four-wheeled cart (Raeda) will only be loaded with thousand pounds, the two-wheeled cart (birota) with two hundred, a horse with thirty; it does not appear appropriate that they cannot support heavier weights.

That in summer eight mules shall be yoked to the four-wheeled cart (raeda), but ten in winter.  We consider believe that three mules are sufficient for a two-wheeled carts (birota). And we ordain that the supervisors of each region shall administer  all these issues, under penalty legally established for them.

Given on the eighth  day before the Kalends of July at Milan, in the ninth consulship of Constantius  Augustus and in the second consulship of Julian Caesar. (June 24, 357 [356])

And the same weight limitation requirements are repeated on CTh.8.5.17,  a norm of  March 14, 364, where they are fixed sentence to exile for the free citizen and to  work in the mines for slave (si liber sit, exilii poenam, si servus, metalli perpetua supplicia subeunda)

We do not shall allow  to charge  vehicles  beyond a thousand pounds, and mail users will have sufficient the concession to carry thirty pounds on horses. All things considered that exceed  this measure must be confiscated to the Treasury at the expense of the person who has broken the law.

Given on the day before the ides of March at Milan in the consulship of the divine  Jovian and of Varronianus. March 14, 364

And again these loads and weights are specified on CTh.8.5.28 De pondere seu onere  redae, angariae, veredi, where these rules applied in Gaul are  extended to Italy and to Ilyrium:

On weight or load to four-wheel carriage (Raeda), to the wagons  (angaria) and to post horses.

Since already it is very helpful to Gaul, it should now be repeated to Illyricum and to the regions of Italy: that in the four-wheeled cart (Raeda) it may be transported not more than a thousand pounds; one thousand five hundred are sufficient for a wagon  (angaria, with a team of four oxen), and no person shall impose more than thirty pounds upon a horse.

Dispatched  in Sirmium on the fifth day before the calends of January in the consulship of Valentinian and Valens,  Augustuses. December 28, 368.

And once again on CTh.8.5.47. Load or weight that may  to be put on vehicles and post horses.

The four-wheeled cart shall be loaded with a weight of a thousand pounds and the car with no more than six hundred, adding that gold and the various types of products which are distributed shall be conveyed not on  vehicles selected by  escorts and tax collectors, but on the vehicles appropriated for the weight and burden. These of course will not be allowed under the threat of capital punishment to take any private burden cargo contradicting  what our law prescribes nor to carry  as a gift other persons who  should be transported as if it were an auction, except for those who are required by the need of escort.

And since the care of post horses must be treated  with the same rationality, the saddle and the bridle shall not pass beyond sixty pounds and certainly saddlebags beyond  thirty-five, with the proviso that if any person  exceeds the limits prescribed by the imperial moderation, his saddle shall be cut into pieces, and the saddlebags shall be allocated to the accounts of the treasury.

Given on the fifteenth day before the calends of July at Constantinople in the first consulship of Arcadius Augustus and in the consulship of Bauto- June 17, 385.

There's even a norm for ensuring the adequate feed of animals of official post.

CTh.8.5.60 On fodder of animal of official post (cursus publicus)

If the forage is valued at an excessively high and unfair price, the public animals (official post)  are clearly harmed  by supervisors (of the service) and the escorts (apparitores) of magistrate. To prevent this happening, your "sublimity" shall provide that  forage does not lack at the changing  stations nor tax for the provincials shall be heavier than it which justice reasonably allows.

Given on the fifth day before the calends of December at Milan in the consulship of Stilicho and Aurelianus. November 27,400

Someone may think that these norms are not so much by respect for the animal as a living being, similar to a man,  than regarding an economic interest for not to destroy a necessary tool. Each one shall judge previous texts as he will considerer relevant.

Of course  these texts contrast  with the use that the Romans themselves make of the animals, if  more exotic best, for all kinds of shows in the amphitheater. As they contrast also with the fun and joy that they arise in many sectors of society today the acts of atavistic cruelty like unhappy and famous "Toro de la Vega", (an Spanish bull festival)  and many dozens of similar examples that the "tradition" can not justify morally.

Animals should not be treated badly