In Greco-Roman mythology, as in almost every mythology, monstrous beings and fantastic animals are frequent. Sometimes these monsters are large animals, others they are the result of the mixture of several different animals and sometimes they are even a mix of human beings and animals.

Dragons, griffins, sphinxes, centaurs, sea monsters, pegasus, gods in human form with animal head as in Egypt … can be found in all the mythologies and cosmogonies of the world and take us back to a very primitive stage of the human beings: some of them to the time of men hunters and others also to the Neolithic era.

Some people think that the creation of these monstrous beings is due to the appearance in the very ancient times of fossil remains of dinosaurs and other animals which were extinct then. It is an attempt of rationalistic explanation of myths. This theory of mythological explanation is called “Euhemerism ", from the name of his alleged creator Euhemerus of Messene, in the fourth century BC, from whom we hardly keep some abstracts and citations.

According to Euhemerus, gods are just historical figures, kings of particular relevance, magnified by tradition. This theory had some success among some ancient authors, especially among the ancient fathers of the Church, who used it to discredit the ancient myths but that did not apply to their own.

However attractive these theories of rationalization of myths seem, the reality is that the human being is enormously complex and in an effort to explain the world around us, we use our intelligence, creativity, dreams and imagination, our unitary conception of the world, to create forms of symbolic and mythical explanation. Thus we use physical experiences to express realities of another order.

In Antiquity fossil remains certainly appear and these findings are documented. No doubt that these fossils sometimes fed the imagination of the ancient people and also help to explain, justify or reinforce the existence of their fantastic animals.

There is a very interesting text by Pliny in which he tells us how the mayor Marcus Aemilius Scaurus, in the year 58 BC, brought to Rome and exhibited the fossil remains of a monster which appeared in Joppa, the present Jaffa, next to Tel-Aviv. Ancient people traditionally placed the episode of the myth of Perseus and Andromeda in Joppa (see in this blog itself. http://www.antiquitatem.com/en/perseus-andromeda-medusa-pegasus-danae ).

Naturally the remains brought by Scaurus were identified with the sea monster that was supposed to devour Andromeda.

M. Scaurus, in his ædileship, exhibited at Rome, among other wonderful things, the bones of the monster to which Andromeda was said to have been exposed, and which he had brought from Joppa, a city of Judæa. These bones exceeded forty feet in length (about 13 meters), and the ribs were higher than those of the Indian elephant, while the back-bone was a foot and a half in thickness (about 45 centimeters).

Perhaps it was a Pliosaur like the one that has recently appeared in the Arctic sea, 15 meters long and 45 tons in weight; or it might be an ancient whale or cetacean.

There is also a famous painting on a Greek vase, a krater of the middle of the sixth century now in the Museum of Fine Arts, Boston, in which Heracles faces the monster that Poseidon sent to attack Troy where Laomedon reigned, who must sacrifice his daughter Princess Hesione of Troy,  in a similar myth to Andromeda´s myth. The painting depicts quite clearly a fossil remain too, probably of a type of ancient giraffe. 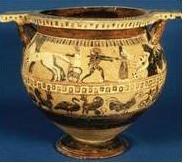 The folklorist Adrienne Mayor seems to have found and check that, in the places where the Greek myths of struggles between gods, monsters and men are located, there are abundant fossils. So as an example she talks about the island of Samos, where the Amazon struggles lie or take place and where there are frequent fossils; or she relates as well the appearance of dinosaur fossils in the deserts of Central Asia with a text of Herodotus: Historiae, 4,13,1 in which he speaks of Griffins:

Another story is told about this issue also between Greeks and barbarians. This Aristeas, natural from Proconeso, son of Caistrobio and poet , said that, possessed by Phoibos, he visited the Issedones; beyond these (he said) live the one-eyed Arimaspoi,  beyond whom are the Grypes that guard gold, and beyond these, again the Hyperboreoi, whose territory reaches to the sea . Except for the Hyperboreoi, all these nations (and first the Arimaspoi) are always at war with their neighbors.

But these speculations, like the colorful and successful documentaries on these matters, have to be observed with keen critical and scientific sense.

In any case the appearance of these remains impressed the ancient people and there are indications that allow us to assume that some curious ancient persons sought and collected these remains.

So Suetonius, also makes a reference to fossil remains of large animals when he refers to the "villae" of Augustus and says in Life of Augustus 72 3

Those of his own, which were far from being spacious, he adorned, not so much with statues and pictures, as with walks and groves, and things which were curious either for their antiquity or rarity; such as, at Capri, the huge limbs of sea-monsters and wild beasts, which some affect to call the bones of giants; and also the arms of ancient heroes. (J. Eugene Reed. Alexander Thomson. Philadelphia. Gebbie & Co. 1889.)

Someone has explained the location of the Cyclops in Sicily by the appearance or discovery there of ancient elephant remains: the central hole would have been interpreted as a single eye in the middle of its forehead.

But all this does not entitle us to think that this is the explanation for the proliferation of these mythological monsters. Human curiosity, creativity and imagination, helped also by daydreams and dream visions, were enough.

In any case it is curious and interesting to see how dinosaurs that so much interest generate today, already impressed us two thousand years ago.