The Spanish word “fallas” derives, according to the dictionary of the “Real Academia de la Lengua”, from the Latin “facula”, which means “torch”. The “Fallas” are undoubtedly the most important festivals in the Spanish Levante, which revolve essentially around the destructive and purifying fire and they held between 15 and 19 March, the feast of Saint Joseph.

As a social phenomenon of so much importance, it has been clearly studied from different points of view: anthropological, sociological, cultural, historical …  Undoubtedly these feasts  serve, like all others, to unite a whole society, which is now very complex, and as democratic and general  feasts against several other with more aristocratic character. In this sense they often  are competing to the most aristocratic celebrations of Corpus Christi.

These festivals have an unquestionable ethical and educational value by focusing the reflection of citizens in events of the immediate social life that are morally prosecuted, put into question, criticized and condemned with an ironic artistic language.
It is possible that in their current or similar characteristics these festivals  do not date back beyond the eighteenth century, without they are sufficient explanations which usually are given (creation by  the union of carpenters, etc.), but it is no doubt that their roots sink into a millennial old tradition.
They clearly relate numerous cults and rites of fire which are made to finish a stage or old year and inaugurate a new year. They therefore fall within the solar rituals and rites of fertility and regeneration of life, particularly of plants, which just are celebrated to mark the arrival of the equinoxes and solstices that mark the beginning of the season. Generally they consist of bonfires and torches around which people dance on jump  and whose light and fire  can be transferred to homes, fields or stables. In many cases straw puppets or puppets, probably substitutes of ancient rites in which was burned a true male or female incarnation of evil in its many forms,  are burned.
James Frazer, in his famous work "The Golden Bough" devotes many pages to these rites of fire, present since prehistory, especially in Europe. Scholars do basically two interpretations. An interpretative line tells us that they are rites to revitalize the light and the energy of the sun which every year languishes and recovers itself because the life of plant and animal nature is dependent from it.  The other line says that fire has a great cleansing, cathartic force, which is used as a tool to end the various evils that threaten man and society.

These two interpretations can coexist and be considered useful for interpreting the meaning of the "Fallas", which are held  when winter is just declining and, in the vicinity of spring in that  the nature blooms.
In the second half of March the nature is just awakening in the Levant. This certainly strengthens the original relationship of these feasts  with the ancient rites of fire. This sense is certainly not apparent to most people who celebrate today with absolute frenzy. It is evident, however, the interpretation of that they are rites of purification which  condemn and make us forget everything bad has happened in the year which ends since the previous celebration.
This has certainly been studied and analyzed by experts, as I said, and I'm not authorized enough to insist on it.

I just now provide a text of Lucian of Samosata, into one of his dialogues, specifically entitled "On the Syrian Goddess".

Lucian is precisely a Syrian, of Samosata, a town on the right bank of the Euphrates, who lived from 125 to181,  in Roman times, but he writes in Greek. Reading of this writer and officer between cynical and Epicurean, which leaves no puppet head, is highly recommended, because among other things, he offers us a vision of reality and complexity of the ancient world that rarely is brought by the academic study of antiquity. In this regard I do not find a sufficient explanation for the lack of knowledge that today is usually about him and his work. In this blog I have referred several times to this author.
Well, in that "dialogue", (actually in this case is a monologue or rather a descriptive article), On the Syrian Goddess, he describes the existence on their land and specifically in Hierapolis of various cults and temples of various gods and goddesses. The most important in your opinion is the temple of Hera or Atargatis, where there are also numerous statues, including a pair of the goddess and the Syrian Zeus or Melkart.
Hierapolis means "Holy City"; it is located north of Aleppo, about 90 kilometers; on Syriac it was called Madog and it is the current Manbi; It was also known as Hierapolis Bambice, or Hierapolis Euphratensis
Among the various ceremonies and rites which he describes, there is one that helps us understand the nature of the feast of fertility and renewal of life, spring festival, with which the Fallas can become related. It reads:
On the Syrian Goddess, 49
The greatest of the festivals that they celebrate is that held in the opening of spring; some call this the Pyre, others the Lamp. On this occasion the sacrifice is performed in this way. They cut down tall trees and set them up in the court; then they bring goats and sheep and cattle and hang them living to the trees; they add to these birds and garments and gold and silver work. After all is finished, they carry the gods around the trees and set fire under; in a moment all is in a blaze. To this solemn rite a great multitude flocks from Syria and all the regions around. Each brings his own god and the statues which each has of his own gods. (Translated by Herbert A. Strong and John Garstang 1913 )


Not too far from where Lucian was born, is Tarsus, the city of Saint Paul, in ancient Cilicia, in the called Asia Minor at the intersection of important routes where  all goods and all ideas penetrate.
Here an ancient rite, which helps us understand the meaning of these rites of fire,  was kept. In this city there were two major gods, one young Sandan or Sandon, who was identified by the Greeks with Heracles or Hercules and another one very old called Ball-Tarz (Lord of Tarsus), who was identified with Zeus.

The two were related to the fertility of the earth and its fruits and its seasonal rhythms, but Sandan  was a closer and popular god.
Every year it was held in their honor in the square a big festival  with singing and dancing. A great pyre was built, where it was stood the statue of the god, which  was burned solemnly.  The ceremony, at the beginning of funeral character, was followed immediately by  the wild and exuberant celebration of the resurrection of the god; and the exultant joy  continued the grief of the faithful.
It was represented the vegetative nature dying under the scorching rays of the sun for  rise  to new life.  This is the idea behind all Eastern mystery cults, which  certainly knew the Jewish-Greek Paul of Tarsus, who was  certainly influenced in integrating early Christianity in the religious currents of the time, with remarkable success, indeed, since Christianity was imposed on  the pagan religion from the fourth century.

It is true that we have very little information about this god; some authors question whether we know with absolute certainty that this god, who dies on the funeral pyre, reborn after, but its similarity to other geographic environment support this interpretation.

In some ancient coins of Tarsus Tyche, the goddess of the fate, is engraved on the obverse,  and back  the pyre with god Sandan burning. 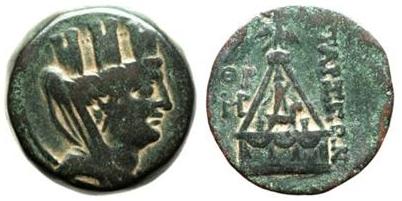 Worships of gods who die and rise  immediately are those of Attis in Phrygia, Adonis in Syria, Osiris in Egypt, Tammuz in Babylon and similar elsewhere, all with the same meaning. This supports a similar interpretation for the god Sandan. Also  Christ is a dead and resurrected god.
Dión Crisóstomo (40-120 aproximadamente) (“boca de oro” significa la palabra “Crisóstomo”) hace una irónica referencia a esta fiesta  y a la pira en la que el dios es quemado en su “Pimer discurso társico” o  “Tarsica prior XXXIII, 47:
Dio Chrysostom (approximately 40-120) (the word "Chrysostom" means "golden mouth"  ) makes an ironic reference to this party and to the pyre where the god is burned at his  The Thirty-third, or First Tarsic, Discourse,  or "Tarsica prior XXXIII , 47:
Dio Chrysostom: Tarsica prior. XXXIII, 47  The Thirty-third, or First Tarsic, Discourse

What would you think, if, just as you might reasonably expect (and as men report) that founding heroes or deities would often visit the cities they have founded, invisible to everybody else (both at sacrificial rites and at certain other public festivals) — if, I ask you, your own founder, Heracles, should visit you (attracted, let us say, by a funeral pyre such as you construct with special magnificence in his honour), do you think he would be extremely pleased to hear such a sound? Would he not depart for Thrace instead, or for Libya, and honour with his presence the descendants of Busiris or of Diomedes when they sacrifice? What! Do you not think that Perseus himself would really pass over your city in his flight? (Translation by J. W. Cohoon, Loeb Classical Library)
In these fertility rites life is renewed and a new life arises from old ash, or better, from the ashes of the old, like the Phoenix, the widespread myth known that symbolizes exactly the same, but now its  meaning is widespread and trivialized to any action or reality  rising from death situation or prostration. The Phoenix, who self immolated by fire every five hundred years for  be reborn again, is ultimately a symbol of immortality.
Naturally, these ancient agrarian rituals of fire have undergone major changes and it was  missed the deep symbolism of renewal and succession of the cycles of nature in favor of a cathartic purification in which the fire finishes  the evils of the year. Moreover, in our time they acquire particular relevance critiques of the political life of society; now it dominates the popular, social, political, moral criticism, with detriment of deeper philosophical questions.
But if it is possible, you should deepen into the origin of things. The origin of the “Fallas”, such as fire festival, is indeed very old.

The festivals of fire are very old: the “Fallas”