This specialization in painting of grapes has allowed that  fans of painting remember the famous story of the “artistic” confrontation  between  two of the most famous painters of the ancient world, the Greeks Zeuxis and Parrhasius.

The contemporaries and rivals of Zeuxis were Timanthes, Androcydes, Eupompus, and Parrhasius.  This last, it is said, entered into a pictorial contest with Zeuxis, who represented some grapes, painted so naturally that the birds flew towards the spot where the picture was exhibited. Parrhasius, on the other hand, exhibited a curtain, drawn with such singular truthfulness, that Zeuxis, elated with the judgment which had been passed upon his work by the birds, haughtily demanded that the curtain should be drawn aside to let the picture be seen. Upon finding his mistake, with a great degree of ingenuous candour he admitted that he had been surpassed, for that whereas he himself had only deceived the birds, Parrhasius had deceived him, an artist.

There is a story, too, that at a later period, Zeuxis having painted a child carrying grapes, the birds came to peck at them; upon which, with a similar degree of candour, he expressed himself vexed with his work, and exclaimed: " I have surely painted the grapes better than the child, for if I had fully succeeded in the last, the birds would have been in fear of it."

The story at first seems less credible and the second part supports the doubts, but that does not mean we can not draw any lessons from it.

At First we reported the artistic tastes of the Greeks in the transition between V and IV century BC.
The essence of classical art is to imitate, emulate nature hiding the art itself; ars est celare artem , the art is to hide the art, till the point  that it does not seem art but truth;  as Ovid says in his Metamorphoses X, 252 about perfection of Pygmalion's sculpture: ars adeo latet arte sua, “so much the art hides itself  by  art's own work”

The aim is certainly the most accurate illusion of realism and more perfect imitation of nature, to the point of deceiving the human eye, producing the effect of trompe l'oeil (deceive the eye). It's what you try to paint architectural elements, windows, doors, curtains, stays … Maybe it is due to some influence of the sets of some plays theatre.

Interestingly, since then until now,  in that kind of painting of still lifes,  the reason of the painting is food or food-related items.

This story  also reports us on the recognition of the status of the painter and painting, reflected on the importance of the events.

There is still also a curious food for thought that the paintings of the great ancient artists  Zeuxis, Parraxius, Polygnotus were appreciated and valued but none of them survives  physically;  We know the story of rivalry between Zeuxis and Parrhasius and their quality as artist by a text written by Pliny the Elder. What would our knowledge of history without the word? This is the reason because  in these articles I  use  few images, relying mostly on the evocative power of the word, in this case written.

But maybe it is justified to offer once one of the works of “Juan Fernández el Labrador” existing in  Prado Museum and visually check why it was called the Modern Zeuxis. 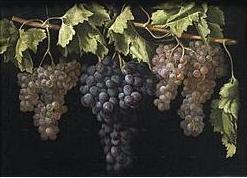